Promoting the Vagabond Mentality
Dreaming Around the World 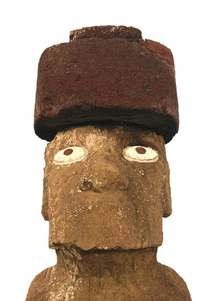 Moai on Easter Island
Travellers travel for a variety of reasons and one of the sleuthing jobs of the travel consultant is to probe and uncover the reasons why.  Memory and emotion play a significant role when it comes to influencing travel decisions and especially those that relate to our formative years, when we were growing up.

Some memories are subliminal and get buried inside our minds until a situation arises years later to have them surface, and then we are overwhelmed by how clever we are for remembering something so long ago.

In my case it was a small statue of a tiki god that my father bought me when I was 7 or 8 years old. Years later, when I as wandering amongst the moai statues on Easter Island, I felt as if I was part of a surrealistic déjà vu, until I started to think of my statue and all the memories it brought back.

Whether I was subliminally drawn to go out of my way to explore Easter Island during my visit to Chile, is something that I can’t answer here and now.  But going that far away (Easter Island is 3750 Km away from Santiago—nearly a five hour flight) to visit a renowned iconic destination had to have some rationale behind it, you would think.  I chalk it up to the travel bug, the lure of mysticism, to yearn, to wander--and to the vagabond state of mind.

Many of us were exposed to this travel mentality when we were younger.  A vagabond is sometimes equated with a vagrant, or a homeless person and in fact if you consult the dictionary or thesaurus, you will find a plethora of synonymous nouns including: palliard, truant, harlot, tramp, tatterdemalion, interloper and deadbeat, as well as verbs such as gad, stroll, railroad, rogue, loaf and loiter.  Each word has its own precise meaning but all are tied to the concept from which the word originated in Latin:  ‘vagabundus’, from ‘vagary’, meaning to wander or stroll.

Adventure specialists use the term ‘vagabond mentality’ to conjure up a mental map or focus in the clients’ mind and imagination of carefree journeying and throwing caution to the wind.  Perhaps it’s best summed up in the Harry Nilsson song “Everybody’s Talking at Me’ where the lyrics include “I’m going where the sun keeps shining, through the pouring rain, going where the weather suits my clothes, backing off of the North East wind, sailing on summer breeze, and skipping over the ocean, like a stone”.

But there are other musical influences that each generation might latch on to, ranging from Jolson’s “I’m sitting on top of the world” to Sinatra’s “Fly Me to the Moon”, and from Chris Cross’s ‘Sailing”, to the Beach Boys “Kokomo”, and others.  Songs allow us freedom of mental association and many times they inspire the theme of wandering, exploring, escaping and carefree exuberance.

Literature too has a role to play in showcasing freedom from routine restraints, authority and conformity. Again, it’s a generationally-based influence that may involve the Huck Finn and Tom Sawyer in us, running away from home with a bundle of our worldly possessions tied to a stick and slung over a shoulder.  It’s the Wizard of Oz where Dorothy runs away and considers joining Professor Marvel for his travels around the globe.  For me it was the 1960’s Disney movie Toby Tyler where he runs away to join the circus.  For my mom it was the Shirley Temple films where something always happens and Shirley runs away to escape or look for happiness. Gen X’ers look to Star Wars where Luke Skywalker (consider even the name itself) wants to escape for adventure rather than stay on his uncle and aunt’s farm.  And for the Gen Y’ers it’s the rebellious Harry Potter, flying high during a game of Quidditch or enacting an incantation, walking through a brick wall and onto the treasures in Diagon Alley.

It’s no wonder that the very nature of travel is imbedded with the genes of vagabonds who want to get away.  But in this day and age, travel demographics have been turned on their head and other than providing a unique categorization of different age groups, they are interesting but not necessarily useful in discerning the reasons why people travel.  Psychographics deals with this and part and parcel of this science is the very non-scientific ‘why do you want to go’? and ‘what is the hidden motivation for wanting to travel’?

Cruising on the seas and waterways is growing in popularity by leaps and bounds.  But is it the expectation of a luxurious lifestyle or is it the swash-buckling adventures of pirates and merchants from the 19th and 20th centuries?  Is it the Jules Verne ‘Around the world in 80 days’ or the Tony Curtis/Jack Lemmon movie, ‘The Great Race’ that inspires dreams of far off places and exotic foods? The Indiana Jones or the Laura Croft personae are some of the best travel promotion characters ever created!

And let’s not discount those influences from nature, whether it was The Incredible Journey, or Free Willy or March of the Penguins --or the 3D Imax film, Flight of the Butterflies, that I recently saw, that depicted the Monarch butterfly migration from Canada to a sanctuary 5000 miles away in Piedra Harrada, Mexico.

While the introductory remarks to the film referred to the hundreds of millions of visitors who travel from Canada to Mexico each year, it was explained that 1.6 million of those visitors are people; the remainder are Monarch Butterflies.  And some in the audience immediately started to mentally map their own journey to see the sanctuary and bring their clients there.  Vagabonds often sprout their own wings!

So now that I have you reminiscing about your own travel dreams that may have inspired you to seek a career as a travel professional, think of the possibilities of extracting this information from your clients and playing up on their secret dreams and wishes.  The simple act of getting to know the client might include asking them what their favourite movie was when they were growing up, or favourite play (If they answer Peter Pan, you know that you are on to something) or favourite song.

Sound silly?  Well to some it may, but you know that controlled silliness can bring down barriers at times and allow people to get out of their ‘business’ persona and enter a different mentality—one that, when it comes to leisure travel, may be a more trustworthy source for uncovering those hidden needs.

Oliver Goldsmith, the 18th Century writer and poet wrote that  “A man who leaves home to mend himself and others is a philosopher; but he who goes from country to country, guided by the blind impulse of curiosity, is a vagabond”.

Many of your clients share in vagabond dreams of travel and curiosity and escape.  The solutions you come up with in response to these ‘dreams’, may be found in the traditionally available tour or cruise packages on the market, but they may also lead into upselling the client on an optional activity that they did not even know existed; or it could lead to a customized FIT where your knowledge, research and expertise send the client off on their secret vagabond trail of discovery.

Get out the bundle on the stick, put it in your front window or on your website, and grab the imagination of people looking for that key that unlocks their travel passion.