Having a Blast in Havana 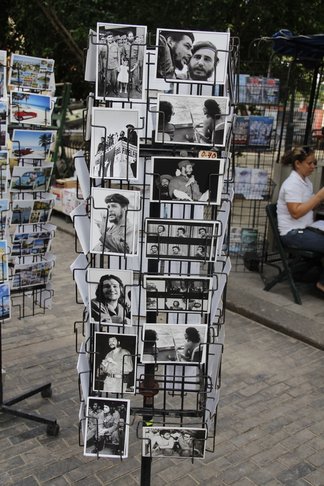 We are enjoying a scrumptious grilled seafood dinner on the second floor balcony of the restaurant, El Patio. The sun is setting and turning the baroque façade of Catedral de San Cristobal de la Habana into a riveting crimson colour. The music from the downstairs bar is wafting its way throughout the historic square when all of a sudden the loud “Bang” is heard. We bolt up in our seats waiting to hear another. Is it an explosion? Is it a building collapsing? Is it a crime being perpetrated? Our waiter comes to the table to explain that this is the traditional 9:00 pm canon shot. “a friendly blast from the past for our tourist guests”. The “canonazo” is fired from la Cabana fortress, as it was in earlier times, to signal the closing of the city gates. But today the gates are open, the night is warm. The bars are ringing with music and did I mention that the dinner was delicious?

Allow me to daydream to the 2nd morning of our stay. We woke up in our room at Hostal Los Frailes, opened the balcony doors and took in the sunshine, the activity on the cobblestone streets below, and some of the sites that only a hotel in Old Havana can provide. The hotel is designed in a monastic mode. The staff wear beige monastic robes. The decorations, from the paintings to the candlesticks to the room keys all harken to the ambiance of a monastery—but actually an extremely friendly and lively one. When we arrive in the lobby for our breakfast of Cuban coffee and fresh sweet rolls from the bakery around the corner, there is a three-piece Jazz band playing. Tour groups explore the lobby, gawking and taking photos of the ultra-green ferns, dripping from the roof to a courtyard pool below. You can tell from their faces that they wish they were guests here too.

We had read about an interesting street, just outside of Old Havana, but decided that instead of grabbing a coco taxi, one of the yellow, bubble-shaped three wheelers, we would walk along the historic malecon, or seaside walk. On our right was Havana Bay; on our left, the ever-changing canvas of abandoned, crumbling and renovated buildings, statues, monuments, old cars from the 1950’s and the traffic that makes its way along the 7 km seawall that joins together all the
districts of Havana, from Miramar to Old Havana. About 45 minutes later, we arrived at Callejon de Hamel, a feast of colour for the eyes. The street was decorated by famed Cuban muralist, Salvador Gonzalez as an homage to the Sentara religion of the Afro-Cubans. Salvador himself described it as “a heavy load of poetic images and sculpture that you have to live through, as you have lived it in the rumba…It is a thing of magic, because it is the result of a conversation with the orishas over a period of many years. It's where you can see landing that white dove of Obbatalá that flies and flies and flies until it finds its place here." And what you see are fabulous painted images on every building, every home and every street post. My friend and I took over 100 photos in the one hour we spent in this living art gallery.

A coco taxi brought us back to Old Havana where we created our own walking tour, starting in Plaza de Armas, the first public square in Havana dating back to the 16th Century.   We did not see any tour signs around the Real Fuerza Castel, so we just wandered amidst the renovations until some workers indicated a staircase where we paid our 1 CUC entrance fee and we started to explore. (Almost all museums in the city charge 1 CUC admission) The fortress, built between 1558 and 1578 is the oldest in Havana, and affords a great view of the ships travelling out to see, the buildings in Plaza de Armas and the forts guarding the mouth of the bay. The small domed cupola is topped by the famous Giraldila statue, which is most commonly seen on Havana Club bottles of rum.  The statue is said to represent Isabel de Bobadila, A Sevillian beauty who watched and waited for years for her husband to return from his search for the source of eternal youth. Havana residents nicknamed the statue Bella Havana.  Rumour has it that the statue on the Fortress is a replica so our next stop, to the Museo de la Ciudad, found us face to face with the original.

The Museum is located in the residence of the Spanish captains general from 1791 to 1898. The baroque building is attractive enough but the displays of Spanish, Cuban French and English furniture, chandeliers and clocks is fascinating. We hired a private guide for 4 CUC and enjoyed explanations on the various rooms in the Palacio and all the treasures they contained. It was absolutely worth the price.

Outside the Museum is the Book Sellers Market—which stretches around the four sides of the Plaza de Armas. Most obvious were books on Che Guevara and speeches by Fidel Castro but there were also used books that covered art, history, novels, guidebooks and even postcards. Bargaining is part of the fun of buying here.

A short walk on Obispo Street led us to Mercaderes Street, just before the pink façade of the Ambos Mundos Hotel, This late 1920’s building was made famous as the venue where Ernest Hemingway wrote the first chapters of his novel “For Whom the Bells Toll”.  In fact, the hotel offers tours of the room in which Hemingway stayed, complete with displays of his typewriter and his passport.

Nothing rejuvenates a weary traveller more than chocolate, and the Chocolate Museum is so popular that a guard has to control the number of visitors. Aside from displays on the history of chocolate, travellers can rest and sample chocolate drinks and sweets before heading out again to visit some of the neighbouring museums including the Gunsmiths Shop Museum, the Ceramic Museum, the Perfume Museum and the Camera Obscura, the latter of which affords a spectacular view of the harbour and Plaza Vieja (Old Square), below.

Time for lunch, and the Cuban music blaring from Taberna de la Muralla on the corner of Plaza Vieja by the art museum is tempting. A friendly greeting suggests that we try the beer brewed at the restaurant and frothy, ice-cold drinks quickly quench our dry throats. The grilled fish and the shrimp and lobster skewers were also excellent.  While we broke our rule and ate at Taberna de la Muralla more than once, we did try different restaurants for dinner including La Paella, Spanish restaurant in a courtyard, complete with flamenco dancing and the most amazing seafood-in- cream dish we had ever tasted.  On another night we dined at La Mena, a popular restaurant right on Obispo, where the seafood platter was tasty and not quite as expensive as other places. The last night we tried La Floridita, another Hemingway hangout, but the service and food were a disappointment.

The remaining days in Old Havana included wandering the backstreets (Havana is a very safe city and not once did we feel that we should not be walking where we were), as well as taking in the Museum of the Revolution, the Museum of Fine Arts (a huge building with a fantastic collection), the National Capitol Building (very much resembling the US Capital in Washington),

Revolution Square (with the monument of Jose Marti and the huge iron work image of Che Guevara on the Interior Ministry Building), not to mention visiting the churches and parks and spending lots of time oggling at the beautifully restored cars from the 1950’s in colours as varied as the rainbow.

We spent time visiting the famous hotels such as The Hotel Inglaterre, built in 1875, The Hotel Nacional, built in the 1930’s and the hotel of choice for such luminaries as Frank Sinatra and Ava Gardiner, Jean Paul Sartre, Buster Keaton and Betty Grable, and the relatively new Hotel Rachel, with its art deco style.

One activity that many tourists pursue is “find the best mojito”. A Mojito is a Cuban drink, traditionally made from crushed mint leaves, sugar, rum, lime and carbonated water and every guidebook and every tour guide has an opinion about where to have the “best” mojito. Some books praise the mojitos prepared on the rooftop bar of the Ambos Mundos Hotel, others swear by the special mojito prepared in the ‘famous bar’ of the Nacional Hotel, while there are those who swear by the mojitos in La Bodegita del Medio, a small Hemingway-was-here bar, not far from Plaza de Cathedrales. This small bar, always jam-packed with tourists, really does make the best mojito! Two drinks definitely add to the theme of having a blast in Havana!

Havana is a wonderful place to spend 2-3-4 or more days. There are lots of things to do and see. And one can never discount the joy of just sitting in an outdoor café, perhaps sampling a Guantanamera cigarillo or drinking a cold sweet glass of sangria and watching the people and the scenery.  Well…there I go day dreaming again of pleasant times in Old Havana.