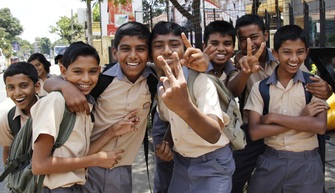 Most of us are familiar with the command to “do as I say, not as I do”, that is oftentimes the refuge for people in authority (parents, government leaders, bosses etc) who engage in questionable behaviour or practices, while at the same time demanding a different standard from their peers and underlings. And there is also the personal application to this ‘rule’, best illustrated in the classic scenario where a retail manager sees one of his salesmen arrive at work with a dour, sour, glum-faced expression. The salesman maintains this ‘stay-away-from-me’ look on his face throughout the morning. Finally the manager approaches to ask if anything is terribly wrong. The salesman says, “No”. The manager asks ‘why then are you so unhappy today”. The salesman says “I am happy”, to which the manager retorts, “so why don’t you tell that to you face....we have clients to serve”.

I don’t mean that you have to wear buttons or banners announcing that you’re a tourist. I mean you have to “Be the traveller”. Let me explain with an analogy.

July 25th, 2002. I was in Seoul South Korea for the first time and the FIFA semi-final match between South Korea (the Reds) and Germany was scheduled for the afternoon. The entire city was bedecked in red T-shirts bearing the suggestion (or admonishment) to “Be the Reds”; to be ‘one’ with the team and not cheer for them as spectators but to actually become a member of the Reds team and cheer them on as you would a team mate, with earnest, encouragement, enthusiasm and energy.

There are many things you can apply this to in life…and travel is one of them. Be the Traveller. Get engaged in the destination. Travel as if it’s your main mission in life and you will reap the rewards.

Travel is a very personal pursuit, with every participant getting out of it what they put in, and every participant travelling for their own particular reasons. It could be discovery or escape or treasure hunting or photography or bird watching or relaxation. It could be the chance to step into your travel alter-ego/persona where you don’t have to worry about being judged by your circle of friends and acquaintances or by the restraints and constrains of your normal work-life routine.

Travel Like you mean it…but pray, how do you do this? Well first off, as a traveler, you need to analyze why you want to travel in the first place. The study of WHY people do things is relegated to “psychographics”. No matter what the surveys tell you about your travel patterns based on your demographic (Senior, Baby Boomer, Generation X or Y), there is really no value in stereotyping travel motives. One senior may enjoy wandering up to Uhuru Peak on Mt. Kilimanjaro in Tanzania (In October 2012, a Vancouver couple, ages 84 and 85 made it to the top) while other seniors may prefer a more sedate vacation on a beach in Cuba or St. Lucia. But the same holds true for every demographic. One Generation Y couple (those born in the 1980’s) may be into desert bashing in Dubai, while another couple may find a family vacation in a villa in Corsica to be perfect. So demographic generalizations don’t really work in the travel industry. Good travel agents (and there are many that will save you time, money and heartbreak) interview their clients to determine ‘needs’. These needs translate into “here’s the value I want to get out of my vacation” and the travel professional obliges by counselling the client about the products and services available for their particular needs. These interviews are, for all intents and purposes, psychographic exercises to determine “why do you want to travel”.

But you know, not all travellers spill the beans. Some will say I want to visit Hong Kong. But they don’t go as far as talking about their true motivation. E.g. “I want to visit Hong Kong because I heard about the amazing street markets and flea markets . I happen to collect Netsuke figures (miniature Japanese sculptures) and heard that I can buy some in Hong Kong. This is really the true motivation for my travels there”. It is good to know that experienced travel professionals know how to draw this information out of a client (here we go again with psychographics). And this has resulted in what has been referred to as the ‘nichefication’ of travel.

I remember one person on a tour in Turkey. He kept his distance from the group, didn’t talk very much and hardly ever smiled. He just took photos and walked behind the group at his own pace. On one of the days when we were in Cappadocia we visited a farm. The man’s eyes grew bigger as he spotted some antique farm implements and he made a bee-line for them. It turned out that he collected antique farm implements. His face broke into a smile and he started talking about his find as if it were a newly uncovered hidden treasure. All of a sudden he was engaged in the tour and when some people asked him questions, you could tell that he was now in his element. The antique farm implements changed the entire nature of the tour to Turkey for this man. The twenty minutes on a farm, out of ten days in Turkey were most likely the highlight of the trip for him. Now if only this ‘love’ had been discovered earlier, his travel agent may have suggested a number of agro-tours that may have been better suited on the whole, to his travel interests and needs.

But ‘travelling like you mean it’ has other connotations. It means chatting with locals, getting into their head space, sharing thoughts and ideas, and coming away with a true appreciation of the people at the destination.

I recall my first trip to Nepal where one of the porters was teaching me the board game “Tigers and Goats” (Bhag Chal). During a long evening of conversation he told me that his dream in life was to work as a head porter for the local tour operator so that he could eat Dal Bhat every single day. Dal Bhat is a dish made of lentils and rice. While it is fairly tasty on its own, I don’t think the porter was making a point about the taste, as much as he was making a point about ‘eating’ in general. While this happened 31 years ago, I remember this story as if it took place yesterday. That travel experience to Nepal was amazing but the conversation with the porter-and other conversations I have had with locals in most of the 68 countries I have visited, have added so much to the experience.

And the rules of ‘travelling like you mean it’ include the directive that ‘it’s O.K. to travel to places where you don’t speak the language’. This can be a challenge but it’s also a test of your travel-ability. For those who are familiar with the group Crosby, Stills, Nash and Young, you may know the song Wooden Ships, which starts with the lyric:

You smile at me and I will understand,
'Cuz that is something everybody everywhere does in the same language.

I first heard these words in high school and have adopted them as my own travel Standard. If you don’t speak the language, you can smile, you can use body language, you can use a phrase book or a picture book. But you will be able to communicate and will most likely come away from the destination with insight and understanding that other travellers were not able to find.

My best example was on a visit to China. I was alone in Beijing and decided on a restaurant for lunch. When I entered, it was like a scene from one of those Hollywood Westerns where the ‘stranger’ comes into the bar and everyone stops talking and stares at the newcomer. Total silence. Well, that’s exactly what happened when I entered the restaurant. It was a bit awkward but finally one of the servers approached with a menu (in Mandarin-- which I don’t read) and tried to ask what I wanted. There was a food display but I was in the mood for chicken and rice and that was not on display. So I did the next best thing. I imitated a chicken (without the sounds) and her face lit up when she realized what I wanted to order. Then I imitated the act of eating rice with chopsticks, and again the server acknowledged that she understood. She asked me something—which I assumed had to do with a beverage—I said “beer’ and she said “ahhh…bee-ah”. She was happy, I was happy and she took me to a corner table. The other patrons were still staring at me. I picked up the menu, opened it, deliberately turned it upside down and pretended to read it. There was some laughter, and then when I looked up smiling, everyone realized that I was having some fun, and they went back to enjoying their meals and conversations. Some approached me and said the one or two words in English they knew. But we were all well and good after the humour of ordering the food. A nice experience to think back on.

‘Travelling like you mean it’ means extending your comfort level, getting involved—really immersing yourself in the destination beyond the attractions and the accommodation. Talk to the people, learn about the culture and history and the food. Learn what makes the destination ‘tick’. Just think of the Taj Mahal in Agra, India. When your friends show their slides of the Taj, they probably mention it in the context of the love that the Mughal emperor Shah Jahan had for his third wife, Mumtaz Mahal. This may in fact be the only ‘history lesson’ in the entire presentation, but it is a little example of appreciating the why and wherefore of a destination and ultimately making the most out of a travel experience.

‘Travel like you mean it’. It’s an attitude of personal pro-activity, motivation and challenge. It can be the embodiment of satisfaction gone wild. It’s a life style. And it’s all yours to appreciate the next time you venture abroad.