Tourist or Traveller:  Looking Beyond the Obvious 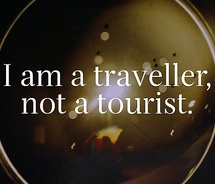 I was intrigued to receive an email recently where, under the signature, there was a presumably rhetorical question:  “Are you a tourist or a traveller?”  It is an interesting question but perhaps not as rhetorical, as it is misguided or on the wrong track. Tourists were in steerage

Mind you, I used that tourist vs. traveller reasoning quite a lot when I started travelling the globe in the 1970’s.  I felt that I had ‘graduated’ from experiencing package coach tours, to joining adventure travel groups, to making my own plans to explore South East Asia.

I had developed an air of travel snobbery. I decided that in my own pre-determined hierarchy of travel legitimacy, I was not a tourist who superficially visited a destination and then moved on to another one.  I was a (cue the music!) “traveller” who embraced the destination and went out of my way to interact with the people, history and culture of that destination. I was the amateur anthropologist and ethno-biologist with a mission to see and do as must as I could during my travels.

I was on the top deck of the travel ship; tourists were in steerage.

Two things happened next.  First, I had an epiphany (which was not easy, considering my background). Then I had an affirmation.  Let me explain.

My epiphany was in the form of a realization that the more I travelled (61 countries to date), the more I sought to understand, appreciate and become absorbed in the destination.

Prior to departure I would (and still do) read a variety of guide books and internet sites, study the language and actually start to research and write the destination talk that I would present to the travel industry and to consumers, once I returned from my travels.

Through all of this preparation, the epiphany was simple.  I was Steve from Toronto, visiting the destination, and not Steve pretending to be an insider of that destination.

My tan, looks, accent, accommodation expectations, health and safety standards and eating habits were ‘ Toronto Steve’, and not Steve from Bali or Mongolia or Vietnam, or Sri Lanka.

My epiphany was that I was a traveller (i.e. one who travels) but that was merely a description of an activity and nothing more.  I was and would always be a tourist—a guest, if you will, in other destinations.

My affirmation came when I attended a Reading Series of travel writers and one of the featured guests was Pico Iyer (Author of Video Night in Kathmandu, The Lady and the Monk, Falling Off the Map, and others).

After he read from his latest book about his friend, the Dalai Lama, he took questions from the audience.  One woman asked “Do you consider yourself to be a tourist or a traveller"  Without hesitation, Iyer said that he was definitely a tourist.

He explained that as one who travels extensively, he always regards himself as a guest in the country, and an outside observer of the culture and the people.  While he had developed close friendships with many people in different countries and had even lived for a prolonged time in many countries, he was still a guest.

He observed that there was no value (intrinsic, experiential or personal) in pretending that he was anything more than a visitor or a tourist.

Perhaps from a marketing point of view, there is some perceived benefit in making consumers feel elite as ‘travellers’ , as well as in subliminally suggesting that a tourist is one of those mass holiday louts who cares little for the destination or the people.  The term ‘tourist’ is used disparagingly to suggest ‘you are not one of those…you are one of our clients”.

But let’s face reality and get with the times.

Firstly, in classic marketing lingo, you have to ‘know your audience’.  And the generational diversity of the travel audience today is staggering.  It is also wise.

People in all generational categories (from mature travellers to Generation “z” travellers) tend to regard travel as a necessity.  It balances their life style in a million different ways (stress release, pure relaxation, education, physical challenge etc).

As consumers become more travel-savvy they are realizing that labels such as ‘tourist’ and ‘traveller’ are in many ways a disincentive to use the services of the company that tries to impose marketing hierarchies on travellers.  Many travellers discover that there is an attraction in them being nothing more than ‘one person meeting other people’ and finding that the words to the Depeche Mode song ring true: “People are people”.  Therefore elitist hierarchies don’t attract.  They tend to turn people off.

Secondly, those who promote positive travel attitudes and experiences know that there are ways, other than the use of arbitrary labels, to make travellers feel more confident in using the travel services of one company over another.  This includes:

•    Promoting your credentials to the industry i.e., your Certified Travel Counsellor designation

•    Your ability to sell yourself, as part of the sales equation

•    Your ability to sell the network of experience that your company represents in supporting travellers before, during and after they travel

The last thing the world needs is a cult of travel snobbery.  Promote travel for what it is:  An opportunity to understand, observe, interact and enjoy.

Make the idea of being a good tourist, your tour de force!