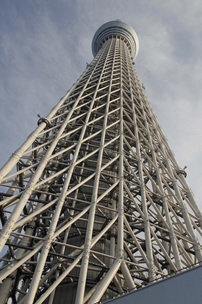 634 Meters of Hai/High Adventure
You’ve heard of Rocky Mountain High, Bali Hai, High Noon, High as a Kite, and Hi and Lois, but now it’s time to experience Tokyo High.  Well, technically, that should be ‘Tokyo Hai’.  In Japanese the word ‘Hai’ has multiple meanings and in a typical conversation you’ll have one person speaking, with the other person responding after just about every sentence with “hai hai”.  It means ‘yes’, ‘go on’, ‘I agree’, ‘tell me more’, ‘right’, ‘ok’, ‘uh huh’ etc.

Coincidentally, the slogan of the Tokyo Convention and Vistors Bureau is YES Tokyo! (Tokyo Hai!)  I am not sure if the yes/hai translation was intentional or not, but it seems so appropriate with all the high (hai) things going on in the city.  And if you haven’t already guessed, I am playing word games with the interchangeable sounds of high and hai.

Already in Tokyo you can see the city from the top of the Tokyo Tower (which is actually higher than Paris’ Eiffel Tower), and from the twin observation decks of the Tokyo Metropolitan Government Building in Shinjuku, or for the more adventurous, from the slopes of Mt. Fuji, only 100 km southwest of the city.

To digress for a moment, there is a niche market of travellers who seek the highest points in every destination they visit. There is no accurate word to describe this phenomenon but we know that acrophobia is the fear of high places, and therefore acrophilia, the opposite should denote a love of high places.  But unfortunately the ‘philia’ part of the word gets caught up in all sorts of Freudian interpretations so we will just refer to these travellers as seekers of a ‘destination high’ (referring of course to their endorphins), and leave it at that.

Seeking the tallest, highest, and closest to the sun, has long been a passion for some travellers.  Perhaps it has its seeds in the myth of Icarus who tempted fate by flying too close to the sun, or perhaps it ties into the myths of Nepal’s Mount Kailash or Peru’s Machu Picchu or Cambodia’s Angkor Wat or South Korea’s Bulguksa Temple, where the architecture depicts the dream of man to bridge the gap between the earth and the heavens.

Certainly the idea of the ‘tree of life’, so central to many aboriginal mythological beliefs was an attempt to provide a stepping stone between the profane (the earth) and the sacred (the sky...the heavens) and the celestial beings who inhabit that domain.

So it is no wonder that the latest, greatest achievement toward reaching the sky can be found in the Tokyo Skytree which soars to a height of 634 m above the city skyline (as a reference, Toronto’s CN Tower is 553 m tall). And of course, aside from height-for-the-sake-of-height, the Tokyo Skytree serves as an incredible viewing portal for the greater Tokyo area and beyond.

Once, when I was asked to look at an ancient shard of pottery in the Middle East and I flippantly said “you’ve seen one shard, you’ve seen them all”, I was reprimanded.  My friend said “Steve, that’s like saying that all trees or all mountains are the same”.  And so it goes with towers.

Travellers seek out the highest on their journeys for the unique architecture, unique views and ambiance that each structure provides.  And where else in the world can you witness Tokyo’s Sumida River transform into a shimmering ribbon of gold during the sunset, while only a few meters away, from another window, you can ogle at the surrealistic red glow emanating from the perfect dome of Mount Fuji.

By special arrangement with the Tokyo Convention and Visitors Bureau and the Public Relations & Promotion Division of the Tobu Tower Skytree, my tour of the facility was through direct access, so we did not visit under normal conditions as do the nearly 20,000 daily visitors to the observation decks.  In fact by the time I gazed upon the city from the 450 m level on November 22nd, nearly 28 million people had visited Tokyo Skytree Town - the area and shopping complex at the base of the tower.

And a walk through of the Tokyo Skytree sheds some light on the attraction.  Clients will need about 2-3 hours to visit on the weekend, if they have not already secured a timed ticket.  You can arrive at the tower by tour bus or via the Oshiage Station on the Toei-Asakusa subway Line.  By the time you get to the very base of the tower, past the souvenir stores and through the crowds holding cameras aloft for photos and poses, you can line up for same-day timed tickets.  Then you can shop in the Tokyo Solamachi mall –which is in the plaza near the entrance to the tower--while you wait for your time to be called.

Once inside you walk along a corridor, on which a living map of Tokyo appears.  The neighborhood in which the tower is located—along the Sumida River--is illuminated, and all of a sudden you realize that the people are moving, the cars are moving and the annual festivals at Asakusa Temple are actually happening in cartoon animation. It’s quite entertaining and amazing.  And later on our hosts note that the colour of the ceiling previews the colour of the lights in which the Tokyo Skytree will appear that evening. Today the ceiling is purple and sure enough, the tower appeared in full regal purple that evening.

Next you pass by the pipes and tubes that are actually holding up the tower—solid reassurance that your visit will be successful—before boarding one of the four elevators (representing the four seasons) to the 350 m level.  This is the main observation deck with grand vistas of Tokyo and area.  We purposefully planned our visit just before sunset for the ultimate in colour.  And the panorama of the river, the buildings in Odaiba and Shinjuku, and  distant Mt. Fuji, all strutted their elegance.  On this level you will find the glass floor where crowds lie, sit, kneel and play while the traffic rushes below.  Those afraid of heights are nervously laughing as their friends try to coax them onto the glass.

Pretty soon a crowd starts to concentrate by the windows offering the ‘best views’ of Mount Fuji which still has a mystical hold on the city; its’ very presence being one of the reasons that the capital was moved from Kyoto to Tokyo in 1868.  There are actually three decks at the 350 m level so if you can’t find space to take photos on one, you can scamper to another.

And then you can ascend even more to the higher observation level—which is angled to bring you from 445 m up to the maximum 451.2 meters.

After taking over 150 photos, we gathered once more outside at the Tokyo Skytree entrance to see the tower, now awash in purple, against a night sky.  The crowds were still arriving (the tower is open from 8:00 am to 10:00 pm) and the shopping mall was as busy as ever.  My colleague and I thanked our hosts, and departed; representing only two people out of the nearly 140,000 that are reported to pass through this area every single day.

Experiencing a Travel ‘high’ has many meanings.  It usually refers to a feeling of supreme satisfaction or even elation at discovering or experiencing something new. And for some, as discussed, the ‘high’ refers to the heights they can physically achieve and challenge by climbing mountains, ascending stairs or counting off meters in super-express elevators in the world’s tallest buildings and towers. The Tokyo Skytree is positioned to provide that travel ‘high’ and the city itself, positioned with its slogan of “Yes Tokyo”, adds another energetic  “hai’ to the equation.

It’s Tokyo on ‘hai’ alert and that translates into a great opportunity for discovery.

More information on the Tokyo Skytree may be found at http://www.tokyo-skytree.jp/en/ and information on Tokyo is available at  www.gotokyo.org/en and  www.ilovejapan.ca