Taxis:  A Love/Hate Relationship with Travellers 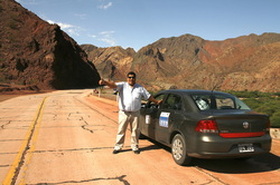 Roberto from Salta is one of the very best!
As I am about to embark on another vacation adventure, I think back on some of the most annoying experiences I have had in the past as well as some of the most rewarding experiences, and ironically, both involve taxi drivers.  While travel writers love to dwell on travel-negatives, as these tend to attract more interest than situations where everything goes well, it is important to acknowledge that there are some fantastic taxi drivers out there, and that the ‘bad’ ones are the proverbial rotten apples in the basket that we have all encountered from time to time.
Okay, okay, so just to give a few examples of the “bad’ ones…there was the driver who refused to set the meter back to “0” when I got into the taxi and pretended he did not know what I was talking about.  He started to yell until I said “Stop right here, I am getting out to find the police”, and then all of a sudden he understood.  The meter was re-set to “0” and I arrived at my destination shortly thereafter.

There was the driver who insisted that after 7:00 pm there was a double-the-fare surcharge—which he demanded after pretending to miss the entrance of the hotel driveway, and stopped at the curb - a comfortable distance from the hotel doorman.  I insisted that he drive up to the hotel entrance and I would ask the hotel about the surcharge.  The driver started to insist that we pay, but we stood our ground and demanded that he drive up to the hotel.  He relented and accepted the fare displayed on the meter.

And of course there are lots more stories that can be told. The word “Taxi” derives from the Latin “Taxa” meaning just that - a tax or a charge.  Today, for many, the word takes on a punny meaning in the sense that some drivers can really ‘tax’ your nerves and your patience!

But on the positive side, there have been a number of taxi drivers who have ‘made’ the vacation for me.   We arrived in Salta in northern Argentina on Christmas Eve.  It was one of those situations where we could not switch our schedule to avoid the holiday arrival without deleting Salta from our itinerary altogether, but we had our minds set on visiting Salta.

We figured we would work things out once we arrived.  Sure enough, no tours were operating to visit Cafayette or to see the other natural attractions on Christmas Day.  One tour office tripled their price and said they would take us in a private car for the day, but that was not an option.

Then after chatting with the very friendly bellboy, he told us that a friend of his would take us in his taxi for the day at a very reasonable charge.   The next morning, Jorge arrived - a huge barrel-chested rough looking man.  We were a bit unsettled as he walked right by us at 7:00 am - we were the only people in the hotel lobby - and asked for us at the front desk.

The clerk pointed to us…Jorge came over, broke into a big smile and a laugh and, well, the rest of the day was fantastic.  He chatted using the few English words that he knew - he played his favourite music cassette and sang and whistled along.  We stopped at many places for photos that he could have easily drove by without us even noticing - and he found an amazing winery/resort in Cafayette where we had a wonderful lunch, before heading back to Salta.

In Ubud, Bali, we saw a man sitting on a street curb holding a hand drawn sign that said “Taxi”.

We thought, what the heck, so we asked him to take us to one of the nearby craft villages.  We had a great time, and the driver was very helpful, but the next morning, he sent his nephew to drive us around.  At first we were sceptical, but Maday turned out be a very personable guy.  He took us to his village to meet his family, found some great photo stops and shared with us his very keen and personal insights into life in Ubud.  To this day we email Maday a few times a year, just to keep in touch.

And then there was Lal, our taxi driver in Sri Lanka who immediately understood  what we were looking for - attractions, culture, local foods, interaction with locals and photos galore, and for three days we were treated to the most amazing hospitality and attention that any visitor would welcome.

It is always dangerous to stereotype people and unfortunately, taxi drivers get their share of negative comments.  But they can also make the difference between a silent ride from one destination to another, and a positively memorable experience that you will want to talk about for years to come.

Travel counsellors can collect names of drivers from their own experiences, and from client feedback and recommend them to their DIY clients who book some arrangements with the agency but prefer to do some of the travelling and exploration on their own.  A good taxi driver recommendation enhances the value-added services that a travel counsellor provides.  While there may be no commission in the recommendation, the good-will and good-times that this can engender adds up to repeat business and referrals, which can be more valuable than a one-off commission.

The lesson is to travel with an open mind, a smile, a sense of humour and a willingness to interact, to learn, to listen and to explore.  You can be on your guard in new situations, but it is important to know when you can take your guard down a bit, relax and share in the joy of discovery