Sri Lanka:  Travels on the Cusp 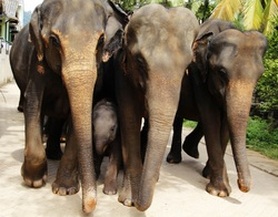 Escorting a September Fam to Sri Lanka was an opportunity to return to a country that had taken me by surprise in 2005 with its friendly people, UNESCO sites, tempting food and rich cultural heritage.  My theory about visiting a country entails not only the research and knowledge that is acquired prior to the visit, but also the post-trip follow up that embraces the country into what might be termed a ‘circle of concern’.
This means that travellers feel somewhat of a kindred spirit to the people in the country when they read media reports about both joyous events and adverse challenges facing the country.  A recent World Tourism Organization Twitter contest winner said it best with the submission, “Tourism is a thread which connects all cultures and peoples.  As we travel, explore and discover, the thread gets pulled tighter”.

But not all travellers feel this way, and not all Fam trippers take time beforehand to try to get an understanding of the destination to be visited.  Therefore they are surprised and alarmed to learn about the history of civil strife in Sri Lanka, and the fact that the ‘war’ has effectively been over since May 2009 does little to quell their apprehensions about visiting the country.

They are upset by the destruction of life and property caused by the Tsunami in December 2004; claim that their clients are avoiding the country because of the Tsunami damage, and when reminded that this is September, 2011 and much of the damage (more on the east coast which is far from any sites the Fam trip or any tourists will usually visit) has been cleaned up with little evidence of the destruction, they are ‘concerned’ that they can’t see the evidence for themselves to reassure their clients.

And they are upset over recent reports that in some small villages in the far northwest, reports of “grease devils’ have appeared in the press and that this is surely a sign that the country as a whole, is unsafe to visit.

The term “on the cusp” usually has an astrological connotation, to denote someone who is born on the transitional point between two astrological signs, so that, to use an example, they are neither wholly in Pisces or Aries.  In the context of travel, the ‘cusp’ refers to a destination that is, in the mind of the traveller, in a transitional stage between safe and unsafe, or is considered to be between having a tourist infrastructure or poor infrastructure, or is pictured in the traveller’s mind as being wholly ‘third world’ (whatever that means to the respective traveller) as opposed to being more akin to the conveniences of home.

To many, Sri Lanka is still on the cusp.  Yet the 19 participants on the ATOURZ/CITC/Sri Lankan Airlines Fam took that important step forward to explore the country for themselves, get involved in activities and come home with very positive thoughts about the suitability of the destination for their clients.

The usual Fam protocol was observed, with evenings spread out over a variety of hotels ranging from 4 star to 3 star, and 10 hotel site inspections that ranged from 5 star to exclusive villas, and from breathtaking architecture to ‘hmmm this is interesting’.

There was lots of driving as we covered something like 1500 km over the course of 7 days, but we saw both cities and countryside on the way including fruit stands selling everything from mangoes to jackfruit, and avocados to cashews.  We saw tea plantations and forests and mountain vistas and rivers.  And the roads were generally of very good quality.

The food was mostly buffet style which allowed the Fam participants to chose their own dishes,  experiment with tastes they might not even know to sample, to  compare ‘plates’ with their neighbours and to visually select what best appealed to individual senses.

And in Sri Lanka, those senses are almost always treated to savory curries, some hot and some mild, surprisingly delicious (and safe to eat) salads, different styles of rice and breads, and yummy deserts.  And of course, tea and coffee which someone might take for granted as a meal finishing beverage, but which is soooo tasty everywhere in Sri Lanka.

But it was the ‘get involved’ activities that grabbed the attention of the Fam participants, and this started on Day Two with a visit to the Pinnawela Elephant Orphanage.

Have you ever bottle fed an elephant? or walked up to a mother guarding her baby and had a spiritual one-on-one with nature?  Have you every wanted to play National Geographic nature photographer and snap away at elephants walking a few feet in front of you as they make their way to bathe in the river?

And there you are, watching the elephants cavorting and playing and showing happiness as they socialize in their family groups or receive their daily rub-down from their mahout.  And as if this was not enough, on Day Three, we hopped into jeeps in Minneriya National Wildlife Park to watch the elephant herds, see the mother and aunts standing over their sleeping two-week old babies, admire the soaring eagles and strutting peacocks and get a sense of adventure and involvement with nature that one does not always associate with a trip to Sri Lanka.

And the excitement of exploration was achieved through visits to the giant lion paws that guard the entrance to the King’s Palace at Sigiriya.

While not everyone decided to climb all 1000+ steps to the top, it was the frescoes and the sheer rock walls and vistas of the mountains in the distance at sunset that grabbed everyone’s imagination.  A visit on another day to the ancient city of Pollunaruwa had the group exploring ruins of temples and palaces, learning about moonstones and then circumambulating the huge dagoba (stupa), before wandering to the serene simplicity of the Buddha statues carved in the rock.

In Dambulla, beyond the 100 foot tall gold statue of the Buddha and after a short but steep climb,  sacred statues of the Buddha fill 5 caves on the mountain top. At the Temple of the Tooth in the city of Kandy, where a relic of the Buddha attracts pilgrims from all over Asia, the history and culture of the country impresses, educates and awes.

And finally a visit to Bentota Beach where we occupied our time walking on the soft sand, hearing the waves of the Indian Ocean, chatting with a lobster fisherman as he pulled in his catch and then posed for a photo, or simply watching the billowing clouds and wondering if they were the same ones we see as we drive to work each morning in Langley or Sault Ste Marie or Quebec City.

While some of the group went shopping or enjoyed relaxing at the resort, a few of us hired tuk-tuks to visit the Port and take photos of the hundreds of fishing boats clamouring for space in the tiny harbour, as well as sharing smiles and greetings with the fishermen repairing nets, cleaning their vessels and preparing for an early morning start the next day.

Was it a safe journey for everyone on the Fam?  Yes. Were their eyes opened to a new and exciting destination?  Absolutely!  Did anyone complain or want to leave early?  Not a soul.  Did their perceptions change about a country that was formally, in their minds, on the cusp of uncertainty as to whether it would satisfy the travel needs of their clients?  No Question!

With great cross-generational appeal, with a huge variety of niche market potential, and always with the warm Sinhalese greeting of “Ayubowan” (May you live longer and be healthy), Sri Lanka is a destination on the move