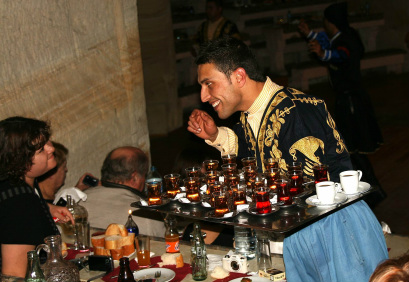 A friend mentioned a Middle Eastern grocery store that sells fresh baba ghanoush, olives, pita and hummus. Having spent some time in the Middle East, I was curious and as soon as I entered the store I was transformed back to my journeys in Egypt, Israel, Jordan, Tunisia and Turkey. The unique smells of the food and pastries wended their way through my mind and vivid flashbacks of exploring each of those countries popped into my brain like flashbulbs and stirred up my endorphins to no end! But the crowning moment in this journey of the senses came when I was chatting with one of the staff about the freshness of the hummus and just then, the sounds of Fairuz, the famous Egyptian songstress, emanated from the sound system. I knew the song well (Nassam Alaynal Hawa) and am not embarrassed to admit that it’s on my iPod. (I have very eclectic tastes in music with a passion for World Music, most of which is in foreign tongues that I don’t even pretend to understand).

Hard to believe but I first heard the music of Fairuz from my days as a camp counsellor when we organized thematic days, one of which was ‘A Taste of the Middle East”, where we set up a Bedouin Market (such as the one in Beersheba, Israel) in the dining hall, served the campers a lunch of crunchy felafel with hummus and tabouleh and baba ghanoush on the side (with a bit of Harif –hot sauce-for those who wanted things a bit spicy). We played Middle Eastern music, taught and performed folk dances, set up a petting zoo (I think we were able to find one goat as there were no camels for rent in the area) and for the evening finale, we brought in a professional belly dancer who performed the Cane dance, accompanied by some of the campers and counsellors.

The smells in the grocery store, together with the music, acted as a portal to bring me back to my camp experience as well as my travels in the Middle East. It was one of the first major destinations I visited and I recall telling people afterward that ‘my heart is in the Middle East’. The markets, the people, the local dress, the ancient buildings and the food were ingrained in me. My routine when I visited Jerusalem, was to wander down to the Damascus Gate every morning, go to the cart selling ‘Bagele’ (sesame seed-encrusted light bagels)—which was not hard to miss as the vendor cried out “Bagele-Bagele-Bagele”, over and over again in a very assertive voice. But I also knew, from speaking with the vendor, that no self-respecting person buys a bagele without za’atar, a mixture of exotic spices into which you dip your bagele before munching it.

As an aside, I will suggest that za’atar has an appearance and odour that could be mistaken for hashish. Not really cluing into this fact, I decided on one occasion to buy a large bag of za’atar to bring home, and when the sniffer dog at Canada Customs happened upon my backpack, he sat down to indicate that something was not quite right. The customs officer looked at the package of za’atar and then looked at me. I explained what it was and with a look of “right...you dip your bagels into this for breakfast...now I’ve heard it all”, he opened the bag, smelled it once; smelled it twice; looked at me again for a few seconds, and then decided it was not the evil weed he was looking for but in fact, the innocuous spice mixture I had described.

Back to the Damascus Gate with my bagele and za’atar in hand, I would buy a fresh orange juice from another vendor, find a good place to sit on the steps leading to the Gate, and just watch and listen as children, men, woman, camels, chickens and goats entered or exited the city gate, some wearing colourful local dress and all sharing in the cacophony of talking, yelling, cursing, laughing, chatting, bleating, clucking, crying and complaining while they carried on with their daily routine.

So my heart was firmly implanted in the Middle East along with the people and the culture that had fascinated me in all the destinations I visited, from Abu Simbel to the Sinai, from Eilat to the Golan, from Amman to Petra, Tunis to the Sahara and just about everywhere in Turkey.

But then something amazing happened. In 1989 I had the opportunity to spend three weeks in Kenya. After breathing in the air, the smells of the food, the markets in Mombasa, the safaris, and the culture of the tribesmen and women, my heart started melting anew. Memories, such as my daily greeting to the old gardener at our resort, bring back strong emotions. Not one person in our group gave him the time of day, but every morning I greeted the gardener with a jubilant “Jambo, Jambo, Papa!”, and his face would crack into a thousand lines of grinning and happiness. This was one of my special experiences (based on the few words in Swahili I was able to pick up from a guide book) and when I returned from Kenya, I announced that ‘my heart belonged to Africa”.

So now my emotions were split between the Middle East and Africa. But other travel arteries soon appeared. In 1990 I ventured into Singapore and Malaysia, including Borneo. We slept in the jungle, visited the Mulu and Deer Caves, got up close and personal with Orangutans in an orphanage, and experienced our first taste of Asian cuisine, sometimes served up over a campfire, other times in a rustic local restaurant with naked kids and dogs running through the kitchen, and sometimes in hotel dining rooms. When the tour ended, I spent time on my own in mainland Malaysia and developed a true love for the culture and the food and the people. So once again, I returned home with the announcement that “My heart belonged to Asia”. And actually for the next decade I travelled to every country in the region, mostly on my own, and always with a determination to see and experience as much as possible.

An early 1990’s trip to Australia threatened to tip the scales again. Although the short trip only covered the area in and around Sydney, I thought that music and the people and the animals and the natural attractions were enthralling. Just wandering down to The Rocks and listening to pick-up didgeridoo jam sessions was fascinating. So, you probably guessed by now, my heart was wholly dedicated to returning to Australia to explore further (something that is still on my ‘to do’ list).

In the 2000’s I decided to take a break from travels in Asia and chose Peru as my first South American destination. I met an adventure tour group in Lima, after which we flew down south to visit Puno and Arequipa and Lake Titicaca before heading to Cuzco and then hiking the five-day Inca Trail to Machu Picchu. Along the way we lived with and got to know our porters and saw incredible Inca structures and terraced fields that one doesn’t get to see when taking the more popular train route from the town of Aguas Calientes to Machu Picchu. Hundreds of photos later, with stories and memories galore, I returned with the thought that ‘my heart belongs to South America”, and through further trips to Central and South America from Mexico to Honduras and on to Chile and Argentina, all accompanied by my struggling and sometimes humorous Spanish-that-sounds-a-lot-like-high-school-French, I came to love that part of the world.

In the midst of these travels, from time to time I would visit Europe and remind myself that this was a totally different type of adventure—but always fascinating and pleasurable. Art galleries and museums, cafes, great food and wine and beer (and even chocolate), history and lots of walking in order to get a feel for the country....from Eastern Europe to the West and from Russia and Scandinavia to the Mediterranean. There goes my heart again!

But there is also Canada, my home country. I have only visited nine of the ten provinces, and none of the Territories yet so there is still so much to see and do. Nothing compares with the mountains and parks and waterways in the west or the small towns and canoe routes in Ontario, or the ambiance of Quebec towns and cities, or the seafood, the history and the people down East. Ahhhh…another heartfelt experience.

At this juncture of my life I still have over 130 countries to investigate. From a medical standpoint, I guess I’ve proven that a heart can be stretched into many different directions without diminishing the power of each beat or the emotions that come from exploring our planet. Sometimes, something as subtle as a song by Fairuz in an Egyptian grocery store in Toronto is all it takes to prove the point.