Picture Yourself Getting Scammed 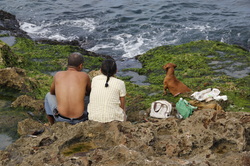 Is the image under copyright ? This one is!
In these litigious times, scammers are having a photo-perfect day!

Case in point: Every time you subscribe to a new internet program or service, you are asked to read a lengthy legal agreement and commit yourself to the terms and conditions. We know that some of the most subscribed sites include graphic, photo and cartoon downloads. We also know that many people don’t actually read the entire legal blurb, but instead they curse down to the bottom of the blurb, click on “Agree” and proceed with downloading the program.

Scammers know that this occurs, and they also know that few people keep records of what they agreed to. Ahhhh…a perfect situation for the picture (or graphic) scam. Here’s how it works. The scammers check out websites at random to see which graphics appear. Then, as the website owner, you receive an official looking letter from a lawyer stating that you have violated the copyright of ABC Images by posting their copyrighted picture on your site. The penalty is $800.00 (or similar). They explain that unless you wish to be formally served with a legal notice from the courts, hire a lawyer and defend your actions—which you will inevitably lose —and then court costs will be added to the penalty, then it is in your interest to pay now.

For most people, the lawyer’s letter is enough to get them to write the cheque. For others, they may wish to contact the legal entity who sent the letter and try to negotiate. Some are successful in reducing the penalty by a few hundred dollars. Then they write the cheque.

The problem with all this is that in many cases, the lawyer’s letter is written by a scam artist who is weighing the odds that you will not be able to prove ownership of the picture or graphic in question, and faced with even higher penalties, you will want to pay your way out of the situation and put this behind you. If you Google “Getty Images Scams” you will get a better idea of how this scam works.

Once you are aware of it, you can avoid it.

Some scams are based on “response”, meaning that all the scam artist wants to know, is whether the email message they have sent (or the letter they have mailed) actually elicits a response. As far as emails are concerned, the scammers probably send out hundreds of thousands. Once you respond, they have you. Once you say “remove me from your list”, they have you. They know that your email is a “live” one and they will not only keep sending you scamming letters, but they will sell your live email address to other scammers. In some desperate (and scary) cases, people have been personally approached based on the fact that they responded to a scammer’s email and were then tracked down.

BUT! Just in case—it is always a good idea to remove whatever photo the scammers (or in some case legitimate companies looking for alternative revenue sources) are referring to and substitute with a photo or graphic that you are 100% certain is permissible to use.

The best response to an email scam (eg I found $8 million dollars and wish to share it with you—or I notice that our copyrighted photo # GY567RDYZ is being used on your website) is to ignore it—send it to your junk folder or create a scam file and store it to educate your staff or peers about what is out there. The same goes for letters you may receive ‘out of the blue’. Even if you go to your own lawyer to ask for advice, in a sense you have lost because that brief consultation may end up costing you several hundred dollars.

The lesson in all this is to keep records of what programs you download, upload or subscribe to, so you can have a paper trail (well actually an electronic trail) to consult the next time you receive a lawyer’s letter out of the blue. Some scams don’t have to be picture perfect if they are framed in the context of due diligence, all in the context of savvy business practices!