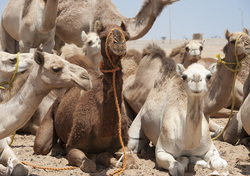 There is much debate about the intention of the saying “May you live in interesting times” and whether it was meant as a blessing or a curse.  But these are interesting times, one way or the other.
Not much has appeared in the travel press about Egypt or its people, save for some brainstorming ideas on alternate vacation destinations, re-routing cruise itineraries and government travel advisories.  Of course in the consumer media, there is much speculation from a bevy of experts on how the situation may be resolved and everyone interviewed provides their version of the correct forecast with confidence.

From a travel perspective, how can we read these interesting times?

We look at current global events, particularly in Tunisia, Egypt and Yemen and see that restless human spirits are challenging authority where basic human rights are concerned, seeking better living conditions, looking for answers as to why things are as they are, and alas, even resorting to violence from time to time when desperation wins out over peaceful expressions of discontent.

What happens when a troublesome situation arises in a country that we have visited during our travels?

Everything from telephone cables to internet connections; from direct flights to social media have made our world a smaller place. Travellers, perhaps more than any group, appreciate the fact that knowledge of a country erases the “it’s on the other side of the world” attitude.  Those who have been to Egypt may feel with the present turmoil that in fact a friend is in trouble; that friend being the country itself and the people with whom they interacted during their travels.  Certainly, nameless, faceless people don’t exist in the world of a traveller. Genuine interactions with the people of a country contribute to the incredible experience that the traveller takes home. In my case, anecdotally, I have too many people-positive experiences in Egypt to list, but a few outstanding memories include:

•    An early morning visit to the market at Imbaba on the outskirts of Cairo, where my friend and I were the only ‘tourists’ amongst families of camel and sheep traders who had travelled over 24 hours to sell and trade their livestock.  Rough looking men caring large knives for animal slaughter or as defensive weapons walked up to me and practiced their only English word, by staring me down and shyly uttering “hello”.

Women holding a child in one arm while sweeping the tent floor clean, looked up and with care-worn faces said ‘welcome’.  When I gave a young girl a Canadian flag pin, chaos broke out and a crowd surrounded my friend and I.  Fearful looking men pretended they were rocking a small child, asked for a pin “for baby”; others just held out their hand and said ‘please, sir”.  All of a sudden it was not a strange place, and smiles and laughter replaced gruff expressions.  It was one of those serendipitous moments…but ended when the first tour buses arrived, and then the magic spell was broken.

•    We were in the town of Luxor, exploring the market at the end of the day.  A young boy called out to us in about eight different languages to see which one we spoke.  After a few words and a donation of one of the finger puppets I give out to kids when I travel, he asked us to meet his father in the store.  The father went into the ‘no charge for looking routine’ but we could tell he was tired and really just muttering a sales mantra.  So again, after a few words and laughs, we offered to man the store and he and his son could be the tourists.  Unbelievably they played the game!  They walked out of their store, and then walked back in a minute later and my friend and I played the role of the market merchants (“no charge for looking, good price for you…”)

We all laughed so hard as we switched roles and the father and son imitated foreign tourists so well.  It was another magical experience that is engraved in my memory.  When I think of the present turmoil in Egypt I think of the people that I met, along with my Egyptian friends in Canada, and Egypt’s troubles move closer to home, for me. And of course this feeling happens all the time for travellers who see the countries they have visited, experiencing troublesome times.

Each and every traveller has his/her own unique repertoire of memories of travel in Egypt as well as other destinations where restless spirits are struggling.  And we know , for example that in the past six months the news has reported on events in Myanmar, Haiti, Bolivia, North Korea, Darfur and Southern Sudan, as well as other places we may have visited where ‘interesting times’ have befallen the people.

Yes, these are “interesting” times, but unlike the ‘curse’ that this expression may represent, it is more realistically a challenge to learn, to relate, to share and to understand what is going on in the world.

I am far from being a religious person but I can recognize sound guidance. Proverbs 4:7 includes the advice: “Wisdom is the principal thing.  Therefore get wisdom. And in all thy getting, get understanding”.

If the mission to travel the world represents the quest for wisdom, then ‘understanding’ may be translated as travel-savvy based empathy with the aspirations of those we have met along the way, and those we will meet in our future travels.