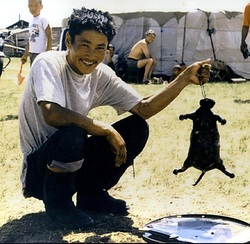 I learned a long time ago that ‘reality’ is a term that is bandied about quite freely. As a history major in university, I learned all about ‘historiography’: the study of why historians’ publish differing versions of history. A historian’s writing could be influenced by family situations, politics, religion, race, age and other considerations.  This is why you can have two learned historians writing about the same event and arriving at very different conclusions.  Reality—what ‘really’ happened-- is something very difficult, if not impossible, to define.
Reality Bites

Today, the term ‘reality’ tends to be one of those ‘motherhood’ terms; used without definition and leaving the listener to arrive at his or her own conclusion.   Reality TV is not helping to sort out the quandary, as everyone from White House party gate-crashers, to parents pretending their young child is trapped inside a breakaway air balloon, to people who love—or hate—Sarah Palin, are considered plausible candidates for ‘reality’ television series.

The shows themselves are supposed to be filmed ‘as it happens’, in real time, even though the version we see is heavily edited.  In fact, we are exposed to ‘reality bites’--little snippets of what the reality stars actually did during their last 24 or so hours.  But of course these are the juicy tidbits that attract viewers eager to delve into private lives.  Reality Bites are very similar to sound bites; extracts from speeches or interviews that a public personality might give.  It is no wonder that ‘reality’ has been twisted, hollywoodized and misconstrued:  Indeed, reality bites (!)

The ‘big news’ in August 2010 is that Reality TV has hit the travel industry and the term “reality travel” has come into use by travel writers, based on reports of tours in Mexico where travellers can lead the life of an illegal immigrant fleeing from the border guards or they can lead the life of a drug smuggler evading the police in the jungles.  Is this anything new for travel aficionados?  Sorry, but the answer is ‘no’

Travel provides an opportunity for discovery of the world in real time, experiencing real people, learning about real cultures, sampling real food and embarking on challenges outside of one’s normal routine. Each person you meet on your travels provides you with their version of reality and each version is as valid and profound as the next.

•    The headman in a Black Lahu village in Northern Thailand told us that his dream was to be able to use all three of the village fields to grow crops on an annual basis, instead of having to allow one field to lay fallow each year.  That was his reality.

•    The 15 year old guide-in-training who accompanied our trek in western Nepal revealed to us one night that his life ambition was to be so successful that he could afford to eat Dal Bhat (lentils and rice) every single night, instead of only when he was allowed on group tours.  That was his reality

•    The 20-something guy in Santiago got off his bicycle at the intersection when we asked how to find a specific restaurant.  At first he gave broken-English directions and then said “follow me”  He walked us to the restaurant which was many blocks out of his way and even when we wanted to thank him with a drink, he wished us a good dinner and rode off.  Later we heard stories from other travellers about similar situations of helpfulness throughout Chile.  A very different mind-set and reality to what we may find in our own country.

Gerry the Guerilla and the Cu Chi Tunnel Syndrome

Okay, Okay, if you want to be very technical, some travel experiences are hardly what one would call ‘reality’.

If you wish to book a 90 minute horseback ride in El Salvador accompanied by “Gerry” the ex-guerilla, then this may be an educational adventure and may allow you to learn about the guerilla experience during the country’s civil war, but it does not make you a guerilla.

The only ‘reality’ about the situation lies in Gerry’s willingness to share his experiences with curious travellers.

Likewise, many tourists in Vietnam visit the Cu Chi Tunnels, south of Ho Chi Minh City. Inside they can see how Vietnamese resistance fighters lived during the war.

The secret tunnel entrances were made for very thin Vietnamese men and women.  The tunnel entrance used for foreigners has been expanded to accommodate more of a, shall we say, ‘Budweiser-type’ waistline.  Along the very hot and humid tunnel paths, tourists are forced to walk with heads bowed to avoid hitting the ceiling and, for the adventurous types, there is an optional walk through a short section which is so low that one can only advance by duck-walking.  Tourists who accomplish this feel that they have experienced the reality in which the Vietnamese had to live, in order to survive during the war.

In fact the tourists have tasted a tiny morsel of what life was like for months and years in the tunnels.  They certainly do get an education and a more thorough understanding than they would if they had only read about it in a guide book.

My big word dictionary (which obviously I keep under my pillow) includes the term “verisimilitude” which means ‘a likeness or resemblance to the truth’.  It is a useful term here, in aptly describing what some of these adventure activities, such as the Cu Chi Tunnel visit, or a talk with Gerry the Guerilla (or for that matter, a walk through a World War 1 trench during a school trip to the War Museum in Ottawa) lend to travellers seeking reality-type experiences.

But hold on, is there anything wrong with marketing “Reality Travel” to your clients?

Absolutely not, as long as we put ‘reality’ in context, and the client understands what they are in for.  The good news is that not too many agencies or tour operators are taking advantage of the yearning for ‘reality experiences’ and using the popularity of Reality TV to promote Reality Travel.

There are many travel specialists who will arrange anything a client wants, for a price, and there is no reason why you can’t do the same.

As far as Reality Travel goes, you too can aim for that Reality Cheque. (get it?)  Your clients can…

All of these ‘reality’ elements and many more can be arranged with minimal effort on the part of the travel counsellor (the one who ‘counsels’ their clients about all the options available to them when they travel).

I will note that for those who sell adventure travel, this is all actually a bit of a yawn—as this is what they’ve been selling for years!

Marmot with a Mare’s Milk Chaser

Before my trip to Mongolia in 2000, I happened to catch the Lonely Planet TV show where traveller Ian Wright explores Mongolia.  I knew that I would see almost all the places that he visited, but I was intrigued by the idea of spending some time with a rural family and learning about their lifestyle.  I spoke to a tour operator when I arrived in Ulaanbaatar about my wish list.  Without any hesitation, he said it could all be done.

On our way to Erdene Zuu Monastery, we stopped to visit a farm and ended up spending most of the day with the family.  They spoke no English, and I spoke no Mongolian but we had a great time.

I was a guest in their ger (a rounded tent, sometimes called a yurt), sampled mare’s milk, watched as they cooked a marmot for lunch (it tasted like chicken, of course), and enjoyed a long horseback ride with only the father, where we chatted (using mostly sign language) about his life and my life. What I did in arranging this memorable day was nothing out of the ordinary in terms of taking full advantage of ‘travel’.  Now this experience could easily be branded as “Reality Travel’ and possibly even command a premium price. There are people that will pay that premium for such an experience.

Reality Travel is nothing new, and has existed since the first person decided to walk beyond the boundaries of his/her village thousands of years ago.  As soon he saw a strange bird, a new flower or encountered another village, his version of reality and his understanding of the world was enhanced. After all, that’s all that most of us want when we travel, whether it’s for an adventure experience or simply sitting on a beach at an all-inclusive and reveling in the sand, sunshine and ocean.

Reality doesn’t really bite. Small nibbles capture the imagination of travellers, no matter where they go.  Pretending to adopt a different persona; imagineering a lifestyle outside of their own…this is the spark that ignites interest in escaping routine and exploring the planet.

After you conduct a brainstorming session with your staff and your suppliers to define the “reality segments’ in your current travel programs, put a sign in your front window or on your e-newsletter announcing that you specialize in Reality Travel.

Leave you clients reeling for reality.  It injects a lot of excitement into travel.  Just like Coke, travel is the real thing.  Don’t keep it bottled up!