Pop Quiz:  What do all these things have in Common? 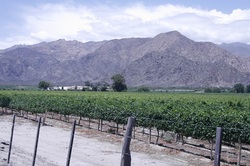 Latin, Tango, Malbec Wine, Mountains, Gauchos, Steak, Waterfalls, outdoor cafes and, did I mention Malbec wine?  If you can’t figure it out, all are associated with Argentina, which became number 65 on the list of countries that I have now visited and explored.
A few years ago my name somehow got attached to the Wines of Argentina mailing list for their annual wine tasting in Toronto.  I sampled Malbec for the first time and after 6-7 more samples of different Malbec wines, I became a big fan and wanted to learn more.

I discovered that Malbec’s are produced in Mendoza, in the west of Argentina close to the Andes Mountains and the Chilean border, as well as produced in Cafayate, in the North.

Now Argentina was always been on my travel ‘to do’ list but after learning more about the wines and then the mountains, and then the other attractions that the country offers, I made an executive decision to promote it to the top spot on my list and last December I spent my holiday exploring the country. I also brought back 20 bottles of wine, much to the amusement of Canada Customs (I guess they forgot about the 12 bottles of Sake I brought back from Japan two years ago).  The customs allowance is 1.5 litres per person and with my friend and I claiming 2 bottles each, we didn’t see the big deal in being over the limit by a mere 12,000 ml, but decided anyway to declare the extra.  Miraculously none of the bottles were damaged, thanks to bubble wrap.

For many travel professionals, 65 countries may be just a spit in the proverbial bucket, but as I don’t work on either the retail or wholesale side of the industry, most of my travels are done on my own time, at my own initiative and on my own nickel.

My rule of thumb is to see and do and taste and try as many things as possible on a holiday and the choice of Argentina seemed ideally suited to this frenetic and unique way of relaxing on a vacation.  And, with a like-minded companion accompanying me, nothing deterred us.

When an enthusiastic subway patron ran into me as he was trying to rush the doors, and my expensive glasses shattered on the subway platform, I shrugged it off and brought out my spare pair.  When my digital SLR camera went for a prolonged swim in Iguassu Falls, I grieved for a minute, then retrieved the memory card (my 1350 photos were saved), brought out the back-up camera and continued exploring San Martin Island to see more breathtaking views of the Falls.

Nothing was going to get in our way and quite frankly, nothing did!

In two weeks of travel we spent six nights in Buenos Aires, four in Mendoza, two in Salta and two at Iguassu. And what an amazing country it is.

The mountains outside of Mendoza are breathtaking and for a guy brought up in London and Toronto, Ontario, the opportunity to see mountains is always a breathtaking experience.  We learned that Brad Pitt was here to film part of 7 Years in Tibet, and we had a glimpse at Aconcagua which at 6962 meters is the highest mountain in the Americas.  This day was only outdone when we hired a driver a few days later, to take us from Salta to Cafayate.  The last 80 km before reaching Cafayate are so incredibly mindboggling, it is hard to describe.  The forces of nature that created the mountain vistas through millions of years of glaciation, wind, water, churning, grinding, and pressurized upheavals have resulted in red (iron), yellow (sulphur), white (limestone or quartz) and green (copper) works of art, hence the necessity for at least an 8 gig Memory Card in your camera.

And of course when you live close to Niagara Falls and then all of a sudden you discover Iguassu Falls, you get a whole new appreciation of the beauties of nature.  We walked to the Devil’s Gorge, followed the Great Adventure to the boat ride which goes right up to one of the smaller falls (hence my camera’s swimming lesson) and then wandered on the lower and upper circuits which lead to vistas and photo opportunities that leave you reeling in awe.

But aside from the ‘incredible forces of nature’ side of the country, there is lots more.

The Intercontinental Hotel in Buenos Aires was a great place to call home.  The concierges were helpful with maps and advice, the room was very comfortable, and the hotel is an easy walk to two different subway (Subte) stops as well as  the weekend street market in San Telmo (which starts at Plaza Mayo -one of the major attractions.) It’s also a short walk to the Obelisk on 9th of July Avenue.   .

Wandering Buenos Aires is the way to go. It is a city of neighbourhoods, with each one having a personality of its own.  The first day we explored Recoleta, starting with the famous cemetery that contains the chapel/vault of the Duarte family.  Eva Peron — Evita — was perhaps the most famous member of the family and her ‘grave’ is the most visited in the cemetery.  Later on our trip, we spent some time in the Evita Museum—the house where she grew up—and where her life and death is depicted through photos, videos and exhibits.

Recoleta also has a small weekend market, tree-lined streets and outdoor cafes where you can sit and watch the people or chat with a neighbour at another table (sometimes using sign language and smiles) as you enjoy your café con leche and a freshly baked croissant or two.

On the matter of food, Argentina is one of those places where you don’t need to be timid as safety and cleanliness are generally not issues of concern.

We followed the advice in our Lonely Planet Guidebook, as well as from some learned friends, and enjoyed incredibly tasty meals that included:  steak at La Cabrera, probably the most popular (and most delicious) of the many grilled steak houses; amazing pasta at Il Matterello; incredible Italian dishes at Bella Italia and melt-in-your mouth salmon sashimi at Ichisu.

Outside of Buenos Aires, the food was equally yummy.  In Mendoza, the best pizza is available at de un Rincon de la Boca, and wonderful ceviche and seafood is the specialty at La Tasca de Plaza Espana.  In Puerto Iguassu, we dined at El Quincho del Tio Querido on the first night and at La Rueda on the last night.

Argentina Tourism graciously put together a schedule for us to help tour the wineries in Mendoza.  Out of the five we saw, Trapiche was by far the most educational experience, but all the other visits were well worth the time.  At Casa Cecchina winery, where organic wines are the specialty we enjoyed a lunch with the café situated, literally, amongst the grape vines.

Afterward the tour was very good, and topped off by a hello from one of the owners of the winery (and yes, this is where one of the 20 bottles I brought home, came from)

The other days were spent walking the streets, which is the best way to enjoy, explore and take in the sites.

In Salta it was in the old colonial centre and the downtown ‘restaurant’ area.  In Mendoza it was the shopping street and the parks and squares. . Back in Buenos Aires, we explored the Palmera area, La Boca (and the Boca Juniors football stadium), the touristy area of Caminito with its brightly coloured buildings and tango dancers on the streets, and the downtown areas with stunning architecture (check out the edificio aguas Argentinas building or the Supreme Court building, on Google), shopping malls, parks and statues.  And, if you love art and discovering new artists, there is nothing like a visit to the famous Malba, the Museo Nacional de Bellas Artes, as well as a host of smaller galleries such as the Museo Xul Solar. Quite a treat for the eyes.

On the last morning we sat in historic Café Tortoni enjoying our coffee and croissant and thinking of the extra days we could have spent in every single place we had been.  But isn’t that the ideal way to end any trip?  While counting countries may be fun and competitive and status empowering, it is only meaningful if you take time to enjoy as much as you can in the available time.  We did that in Argentina and it will always be a fond memory to hopefully, revisit sooner rather than later. Now that’s what counts!