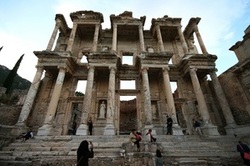 The stunning Library at Ephesus, Turkey
Excuse me for being a bit pedantic but the Turkey jokes and puns have got to stop.  Turkey was not named after the Thanksgiving bird.  In the Turkish language, the word “turk” means ‘strong’, but the actual origin of the country name is believed to originate from the Chinese phrase “tu-küe”, which, according to language expert Glen Dixon, meant “People of the Earth” and may have been first used to refer to the Mongols who occupied the area of present day Turkey in the 13th Century under the leadership of Genghis Khan. That being said, the Turks I met were hard working, friendly, helpful, had an engaging sense of humour and took great pride in their history and culture.  The context of all this is my recent attendance, as part of the ACTA Board of Directors, at the ASTA (American Society of Travel Agents) International Destination Expo in Istanbul.

The IDE is an annual gathering of travel professionals who have one goal in mind: to learn about destinations first hand.  Attendees are able to check out a new destination each year, attend professional development seminars and workshops, learn about the history and culture of a destination and take advantage of the pre and post trips associated with the conference.  It is a prime example of “education-on-location”.

For the 2010 IDE, Turkish Airlines and the city of Istanbul provided the perfect backdrop to a very fulfilling hands-on educational experience.

Are Fams worth it?

I am often asked about the value of Fam trips, and my consistent response to both consumers (who think that travel agents get tons of freebies on a regular basis) and to the industry (who sometimes have to pay for their own fams because some employers think that it is just an excuse to take an extra holiday), is that Fams are the prime method of professional development available to career minded travel professionals.

Travel counsellors sell the world.  You have to know your product.  Therefore get out there and learn about accommodation choices, restaurants, attractions, activities and the ‘flavour’ of a destination, and then discuss your first-hand experiences as part of the credentials you bring to the job and the expertise that helps define the value that you bring to your agency and to your clients.

We arrived in Istanbul on a Friday evening, literally threw our bags into our hotel room, grabbed a taxi and 10 minutes later we were in the Taksim area.  Martin Vosler, the Turkey specialist with WD World Travel in Vancouver who made the travel arrangements, had mentioned that Taksim was literally overflowing with restaurants, and he suggested that “we just had to pick one”.

We wandered down the broad pedestrian mall a short distance, before settling on Hacibaba—a second floor outdoor café overlooking a courtyard with friendly, helpful staff and good food,

Here we had our first taste of Raki, which is the national drink of Turkey.  The anise-based drink, when mixed with chilled water, turns milky-white and is referred to as aslan sütü , meaning ‘lion’s milk’ or ‘the milk of the brave’.  Based on the usual 45% + alcohol content, it does take a brave person to have a few glasses, but it turned out to be a great way to mellow out after the 10 hour direct flight from Toronto.  It was also a perfect way to immerse ourselves in ‘being in Istanbul’.

Caving into a new experience

Bright and early the next morning we took the 70 minute flight to Keyseri, just outside of Cappadocia, met Ozkan, our guide from TravelAtelier, and began a two day adventure that included an off-the-beaten track visit to the pigeon houses and cave churches in the Soganli Valley, as well as time to explore the town of Mustafapasa with its historic Greek houses.

At the end of the first day we checked into the Esbelli Evi Cave Hotel.  Aside from the novelty of sleeping in a hotel room that was once a 5th century cave dwelling, the hotel features very friendly staff, a tasty breakfast buffet and a great location—only 15 minutes walk to the Urgup town centre.  That day ended with a delicious dinner of local specialties and Cappadocia wines at Somine Restaurant (pronounced Cheminée (fireplace)).in the Urgup town centre.

We did not need an alarm to wake us the next morning as the call to prayer echoed and rebounded from house to house and minaret to minaret.

My Japanese companion had never been in a Muslim country before and was not too sure what to make of the mysterious time-honoured call of the muezzin.  After some moments of contemplation, I asked what was on his mind and he said that he had a flashback to when he was a child in Hakone and every morning the potato vendor would walk through the streets yelling “Amakte Oishi Yakimo—oimo-oimo-oimo” (roughly translated as ‘sweet delicious grilled potatoes”).  My friend said that the call of the muezzin reminded him of this long-lost childhood memory.

Either way, the call is haunting, profound, and woke us up in time for our hot air balloon ride with Kapadokya Balloons.

Seeing the world from aloft

My first hot-air balloon ride was, in a word, amazing.

There were 12 of us in the balloon basket for the 90 minute ride.  The Cappadocia land forms, the so-called fairy chimneys, the mushroom topped cave columns, the valleys, the tall poplar trees, the farming fields and the famous Uchisar (fortress) rock structure were perfectly complemented by the tranquil blue skies and the incomparable vistas that only a balloon ride can afford. At the end of the journey we were treated to the Cappadocia version of a mimosa—Champagne mixed with cherry juice.

The rest of the day was spent exploring the more touristy areas of Cappadocia, everything from trying out the potters-wheel in a ceramics factory in Avanos to exploring the Goreme Open-Air Museum with its 3rd century frescoed cave churches; and from. photographing the fairy chimneys (this time from ground level) to crouching through the tunnels in the underground city of Kaymakli. A late night flight returned us to Istanbul.

Getting lost in finding Istanbul

While the ASTA Conference occupied a majority of our time, there were opportunities to explore the city.

I learned many years ago that you get much more out of a destination if you walk it…and that is what we did, of course with cameras in hand.

Mandatory visits included the Blue Mosque, the Topkapi Museum and Aya Sofia Church, certainly some of the most historic and dramatic landmarks in the city.  But we also got pleasurably lost and turned around several times in negotiating the back alleys leading to the Grand Bazaar and then continuing on to the Spice market to buy pistachio nuts and Turkish Delight.

At one point, we discovered a café across from the Blue Mosque and decided to grab a table and share in the experience of drinking tea and smoking the apple-flavoured tobacco in a traditional water pipe (Nargile).  As a non-smoker, I lasted through three ‘inhales” and then decided to save my lungs (and the environment), but at least I tried it!

One of the top rated activities in Istanbul is a visit to the Cemberlitas Baths, built in 1584.

After wrapping yourself in the traditional pesternal (a red towel), you lie on a very hot marble slab along with 7-8 others in the steam room for 15 minutes or so, until an attendant taps you on the foot and signals you to flip over like a fried egg.  After another 15 minutes, another attendant signals that your time has come for the scrub.  He unwraps a sealed scrub cloth, dumps a few pails of hot soapy water on you and then, with gusto, energy (and considerable pain for me), starts to scrub your legs, arms and back.  Again after a few minutes, you are flipped over and the scrubbing resumes.  You are then doused with progressively hotter water, told to take a shower, asked for baksheesh (a tip) and sent off to relax and get dressed.

It was horrible, painful, exhausting, hot, uncomfortable but absolutely enjoyable and energizing.

When we left, we actually felt that we were levitating on the sidewalk.  It certainly lent credibility to the concept of, No pain, No Gain.

After a cool beverage at one of the chintzy but colourful, plastic-bean-bag-chair cafes under the historic Galata Bridge, we headed back to Taksim for our final dinner at an outdoor Kabab restaurant, and then back to the hotel to pack for our trip home.

Twenty years after my first trip to Turkey, it was obvious that Istanbul was still a warm city with great people, wonderful sites, delicious food, fascinating markets, awesome landmarks and a uniqueness that only a city, straddling the continents of Europe and Asia could meld into a success story for tourists. My return was like meeting an old friend:  Lots of memories to share as well as lots of catching up on what’s new.

But my tale of discovery also emphasizes that you get out of a destination what you put into it.  In my case I put in some advance research and planning, a lot of enthusiasm, a craving to get involved with the cities that I visited and a desire to take photos and notes to be prepared for any questions that a future traveller (or travel professional) may ask me about ‘what’s it like to visit…”

I wanted education-on-location and I succeeded!