In Niseko Village all is well... 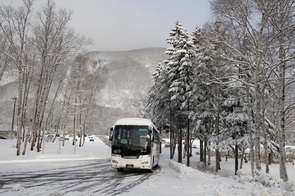 Outside the Niseko Hilton-a veritable winter wonderland.
4.45 am is a unique time of day in a resort hidden away on the mountainous roads in Niseko Village, in the north western area of Hokkaido Province in Japan. We arrived here about twelve hours earlier and were greeted by the hotel management in the cavernous lobby of the Hilton hotel, graced with a huge furnace, seemingly suspended from the roof and backed by a bar that displayed bottles of sochu and sake all the way up to the ceiling. A veritable stairway to heaven for those who imbibe.
At 4:45 am the next morning, the onsen (hot spring) is a place of solitude. The dark mineral waters, heated to 42 degrees Celsius are soothing, relaxing and cleansing and when combined with the subtle zen-like music in the room, provide a place for quiet reflection.

After we checked into the hotel twelve hours earlier, we had previewed (or perhaps the word pre-soaked is more apt) the onsen waters both inside the building and outside. With the temperature hovering around 0 degrees, you can exit the heated room, scamper down a staircase and immerse yourself in another hot spring pool that borders on a fish pond, that in turn, borders on shore of fir trees.

Each tree is a testament to the day's weather, as Niseko had its first major snow fall of the year. The boughs of the trees, heavily laden with the snow, are given a surrealistic look by the floodlights in the onsen area, and the wild, cascading snowflakes seem to be caught in a crazed vortex of white powder. Niseko is ski country and with the season formally opening on November 23rd, no sight could be more appealing. You can feel that cold, captivating energy and excitement building up.

Before we checked in yesterday, we travelled from the city of Sapporo to the town of Otaru, famous for its preserved 19th Century warehouses that line a canal in postcard perfect fashion. When the city decided to preserve the warehouses they did so in the spirit of tourism and, just as Yokohama has done, Otaru created venues for shops and restaurants; people places to celebrate the very idea of being in a different destination.

We visited the nearby fish market and then had lunch on sushi-dori (Sushi Street) not too far away, and all this with the wildly blowing sleet that had been falling all morning and peppering our faces with ice pellets.

After our brief encounter with the town, it was time to head into Ski Country, just as the sleet turned to flaky, wet snow and then heavy, wet, snowman-building perfection. Officials from the Niseko Tourism Board met us at one of the ski lifts to provide some background information on the area, which attracts Australians, Chinese, Taiwanese and Japanese ski aficionados. Then it was on to one of the rent-able condominiums in the area where the simple decorations of Ainu Elders (the tribal natives of the area) grace the walls, along with scenes of Japanese temples and trees. Each suite in the condo complex tried to outdo the others in terms of comfort,  luxurious amenities, and views of the mountains.

After a final stop to sample some local sweets, we arrived at the Hilton and once settled, it was time to explore the area some more. We hopped into a taxi for the 10 minute ride to the Niseko Club Izakaya, the only one in the area open during the pre-Ski-season. (the town of Kuchan is about 20-30 minutes from the Hilton and apparently has more bars and restaurants but no guarantees they would be open on this Sunday evening).

Talk about judging a book by its cover. We were seated in a black walled cubicle in a very modernesque bar/restaurant. Usually an Izakaya has an open social atmosphere with a warm convivial ambiance and shelves of sake or sochu bottles, each labelled with the name of a client who will return to finish more of the bottle on the next visit. But this Izakaya was nowhere near what we expected. So a bit disappointed, we ordered the only sake on the menu (It was called Tagatsuru, from Hyogo Prefecture ) and it was soooooo smooth and clear and tasty and for 1500 yen - about $20.00 - you could order as much as you can drink within the 180 minute time limit...so we knew we were in the right place!

But aside from the booze, one usually goes to an Izakaya for the food and we were still pretty sceptical. We started off slow - ordering pickles, sashimi (raw fish) and grilled squid. The pickles were fresh, crunchy and marinated perfectly with a wonderful flavour. The sashimi was the melt-in-your-mouth variety, and the grilled squid was perfectly prepared with a mayonnaise dip. We were in taste bud heaven. But it was not over yet. We ordered the second round.

Atsu Age is fresh, almost creamy tofu, deep fried with leeks, fish flakes and ground ginger. Then we moved on to the Hokke, a local fish, grilled and served with ground radish (daikon). This was the kind of dish that after every single bite, we had to lay our chop sticks down and reflect on the amazing flavours. Every single bite!

We then had Shime Saba, small pieces of pickled mackerel but again, it was fresh and almost sweet. And lastly we had an-ka-ke soba, a yakisoba dish of fried noodles with a special sauce.

The food was so unbelievably good with local fresh ingredients. It was the kind of food that major up-scale restaurants dream about serving and here we were in a small Izakaya where obviously taste perfection and pride in culinary achievement was par for the course. We congratulated the Head Chef, Hikita Tasuteru, and then hailed a taxi to return to the Hilton.

So now it's 4:45 the next morning. The onsen waters are again soothing.  It is even colder in the outdoor area but we go there anyway. And although the floodlights have been turned off, a choir of eleven fir trees huddle together with their boughs full of white pillows of snow and allow the wind to whistle through their branches, almost like a hymn to the wintery weather.

After breakfast, many hours later, we will head on to see more of Hokkaido and then drive to the airport for our return flight to Haneda airport in Tokyo.

In our daily lives we often hear the expression "Take time to smell the flowers", meaning that you should stop running around and take a breather to appreciate the small but important things in life. In Niseko there are so many things to appreciate from snowflakes to good sake, and from hot spring waters to crunchy, fresh Japanese pickles. It's now 8:00 am. The sun is shining, there are a few snow flakes still falling and all is  still, very, very well.