The Sounds of Silence:  Meditating on Travel 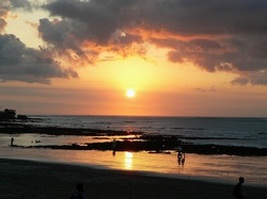 About two hours into the safari we went off the main path in Kenya’s Tsavo West National Park. The driver motioned for us to be quiet and then the guide pointed to a group of about 10 buffalo in the tall grass, near the trees.  We crowded through the sunroof of the jeep with cameras ready to snap photos.  For possibly 60 seconds, there was no talking, no car engines, no sounds of tourists at all, save for a few camera clicks.
The only sound was the crunching, munching of the buffalo and it was like soft, delicate, mesmerizing music.

It was one of those “there are five billion people on the planet (this was 1987) and here we are –in a group of nine people—the only ones on the whole planet taking in this wonderful scene”.

But 60 seconds was the threshold for most of the group.  They wanted to move on to see a real kill if possible, and why on earth were we wasting time looking at buffalo chewing grass.  The comments started, then the sarcastic remarks and jokes, and then the turn of the jeep engine and off we went.  To this day I think of the absolute tranquility of that moment and wish we could have stayed there much, much longer.

The latest travel trend, for me, is 30 years too late!

It is based on the pursuit of silence by travellers who lead hectic, stressful, busy lives most of the year and crave not only a change of venue for their vacation, and different experiences, but they also yearn for silence.  And this is a cross-generational, cross-vacation-mode phenomenon.

You can be an adventure traveller, a package tour aficionado, a cruise lover, a coach tour maven or a DIY enthusiast, and still seek the sounds of silence.

And, fitting to its nature, this is one of those niche market cravings that generally goes unspoken and unacknowledged by travel counsellors.  After all, realistically, when is the last time you asked your client if absolute quiet is important to them when they indicate Punta Cana or the Oasis of the Seas or a 14-day jaunt through 10 European countries as their travel desire?

When I was in Rome my goal was to see as many Michelangelo sculptures as possible.  After speaking with the concierge in my hotel, I headed to San Pietro in Vincolo Basilica at 7:00 am.  No one was there-not even the custodian.  I let myself into the Basilica and stood with Michelangelo’s statue of Moses.  Just the two of us alone in silent dialogue before the roar of the first tour bus of the day.

In Israel, although I had visited the ancient 12th century Crusader fortress of Kalat Nimrod before, we woke up particularly early to drive to the castle and sit on the ruined walls, with the magnificent views of the Upper Galilee before us. There was nothing to hear, save for the wind whistling through the ruins and the cries of an Eagle.  You know you have found a great travelling companion when you can both appreciate the silence of the occasion and you know that talking can ruin a lifelong memory-in-the-making.

Travel counsellors who suspect they have clients who are appreciative of the sounds of silence can value-add to their services by acknowledging this need, as well as making suggestions appropriate for the destination about to be visited.

Getting up early is a winner almost all the time.  Whether in a city, on a cruise or a busy beach, the early morning affords the quiet and the silence that some travellers treasure.  People are waking up, setting up market stalls, sweeping their homes or the street, or getting their family ready for the day.  The morning light is a wonderful time for photos-only rivalled by twilight time.

But not everyone is keen on waking up early, especially on vacation.  Meditation Retreats have been around for decades and the popularity of yoga has increased the number of ‘quiet places’ that travellers can experience—even in a major city hotel or a well-trafficked tourist spot.

In Honduras we chose to stay at the Hacienda San Lucas, in the hills of the Copan Valley, overlooking the town and the site of Copan Ruinas.  While there are many hotels in the town—all within walking distance of the stores, the restaurants and the nightlife, we wanted a simpler experience at this tranquil eco-lodge.  And aside from the natural ‘sounds of silence’ at the Hacienda, they had a yoga/meditation platform positioned to take in a particularly beautiful vista.

Those who know about—or are advised about the Hacienda are part of this seekers of silence niche market.

So, aside from morning wake-ups and well researched accommodation, there are many other meditative sites that travellers can visit.  Most travel counsellors have a fairly wide compendium of all the places they have visited and travelled and if you reflect on what you did—or what you could have done—then you can most likely come up with your own Silent list for those special clients.

It could be watching bats fly out of a cave at dusk in Malaysia or sharing a moment with a reclining Buddha in Thailand or Cambodia or Myanmar.  It could be climbing a hill to a temple, watching the fishermen take in their catch or marvelling at a geyser, a mountain, a tree, a canyon, an ocean or the sunset.

Meditative travel does not necessarily imply what we think of as traditional meditation and chanting a mantra.

It means contemplating, thinking, daydreaming, getting lost in history and in your imagination.  And offering your clients pointers on where to find the sounds of silence on their next getaway represents yet another relationship builder. Many travellers yearn for these experiences and you are the one that can help them achieve their secret silent aspirations.

On a somewhat related note, one can interpret the sounds of silence in a more profound sense when we think about the plight of our global neighbours and how sometimes they are not able to speak for themselves, and we must do so for them;

How on occasion we must reflect (for example August 6th was the 66th anniversary of the dropping of the atomic bomb on Hiroshima and we have to think how that has affected our world); and on occasion we must recall (this year is the 40th anniversary of the tragedy that the civil war wrought on Bangladesh, and for many of my generation it was George Harrison’s concert, album and movie that brought us face-to-face with human suffering); and on occasion we must contemplate how we can help out (I am speaking of the drought and famine in Somalia and the hundreds of thousands of people who are caught in an unbelievable life threatening predicament)

Just as you may wish to value add to your service by speaking to your clients about ‘silent’ opportunities you may also wish to provide them with an opportunity to help in times of need.