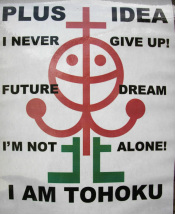 I am back from another wonderful adventure in Japan and am pleased to confirm that the themes of ‘cope’ and ‘hope’ seem to be present in many of the places I visited.
Cope, in the sense of helping to save electricity and not complaining about the periodic shut down of store, restaurant and subway air conditioning systems, or the slower subway service or the dimming of street lights in some neighbourhoods in Tokyo.

Hope, as exemplified by the posters plastered on walls near the famous Tsukiji seafood market that remind locals and visitors alike that the world is ’one’ with Tokyo in their struggle to return to the status quo after the Fukushima disaster.  And of course, we all have hope for the thousands of people who are still living in temporary shelters to the north and east of the nuclear reactors, after the devastation of the Tsunami on March 11th.

Empathy can be a powerful emotive tool that keeps human tragedy and challenge alive.  If anything it continues to raise questions about what the government is doing to help the displaced citizens, most of whom are seniors who simply can’t start over again—and whose children left for urban centres years before and would not have the skill or ambition to take over the parent’s business or farm or fishing operation.

Empathy can also be responsible for asking why action is not been taken on a more accelerated basis, and whether the future of Japan (or other countries with nuclear reactors) bodes well for the continued safe operation of nuclear power facilities.  Empathy also brings us around to questioning the activities of international charities who collect money to assist specific high profile global situations and then seemingly slate some of the funds to cover immediate challenges while stockpiling the rest of the funds for future situations that have no relation to the current disaster. And then of course, there is the question of whether the donated monies actually help the afflicted to whom they are intended.  We need only look at the sad situation in Haiti one year after the earthquake, as an example of charitable efforts gone askew.

But we don’t have to dwell on the negative, and certainly in Tokyo and Shikoku, where I spent my time, people are shopping and going to restaurants, school groups are still visiting museums and kids are still entranced with Lady Gaga and Justin Beiber.  While the famous ‘naked men’ festival was cancelled in May in deference to the national tragedy in Fukushima, other Festivals scheduled for the summer seem to be on a ‘go forward’ plan of action.

To put my own “interesting footnote” on my trip, we returned with 16 bottles of sake—literally (and coincidentally) one for every day we were in the country.  With 1600 sake breweries scattered across the country we were at least assured that our purchases would help local entrepreneurs—aside from the fact that we love to sample and learn about some of the hundreds of different kinds of sake on the market.  Our stash included eight 1.8 Litre bottles, carefully bubble-wrapped in 2 large suitcases and 2 large backpacks, each of which weighed exactly the maximum allowable for international flights” 22 Kg.

When we arrived at Canada Customs in Toronto, we checked the box on the declaration form to indicate that we exceeded the allowable limit, and when asked how much we were bringing into the country, we declared all 23 Litres (each person is allowed 1.4 L).  The customs officer asked us to repeat this-twice- and then inquired as to which restaurant we worked for. But it was just for home use—sparing of course--over the next year or so, before my next trip to Japan.

If anything, to complement the thousand or so photos we took, we now have a tasty souvenir of the country to help bring back memories of Japanese hot baths, bento box lunches, sushi and sashimi dinners, bike riding, Sunday markets, shopping at UniQlo and Muji, clamouring up to the top floor of castles in Matsuyama and Kochi, exploring the Devil’s Cave outside of Takamatsu, visiting pottery towns and just enjoying ‘being’ in Japan.

As I have written elsewhere, a strong declaration of assistance that goes beyond a monetary donation, is the physical act of visiting a country in need, when appropriate to do so.  It is appropriate, safe and more than satisfying to visit Japan now.