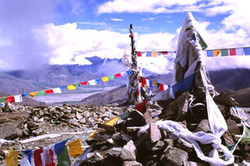 A Tibetan Mountain Pass with prayer flags
Some of you may have seen the reality TV series. “Ice Road Truckers, Deadliest Roads”. The program is filmed in India where three truckers, transplanted from the ice highways of Alaska, are challenged by the notorious road conditions in India that include narrow mountain passes, honking, irate drivers forced to follow behind a truck carrying tons of material, trucks passing trucks on disintegrating waterlogged roads, or roads that are directly being assaulted by rockslides, waterfalls and wandering cattle. You name it, the IRT people face these obstacles over and over (and over) again every week.

How real is real? Well, pretty real! Except move the venue to the famous Friendship Highway that connects Tibet with Nepal and you have a pretty fair representation. I was on an adventure tour that met in Kathmandu, flew to Lhasa and then after exploring Tibet for several days, drove back to Kathmandu.

On the morning of July 2nd, 1999 we woke up at 4:30 am and left the Everest Snow Leopard Guest House for our drive to Kathmandu. The first part of the trip was a climb up the Nyalam Pass at 5050 meters and then a descent to 2300 meters. For the first time we could see the Sun Kosi River raging way down below us. We were concerned about the weather, as it had rained the day before and the dirt highway did not look too stable. It didn’t help that the higher we drove on the ‘highway”, the thicker the fog. Waterfalls cascaded from great heights and ran over the road to only to continue falling several thousand feet to the river below. Rock slides were everywhere.

But we were on an adventure tour so we asked if we could walk the highway for a while. The driver agreed and said he would meet us about 45 minutes along the road. This was absolutely the most enjoyable part of the day. We scrambled off the bone-jarring bus and wandered past green trees and wildflowers, breathing in sweet-scented air. In fact this part of the highway resembled a national park, more than a busy thoroughfare. But once we met up with the bus, the truly scary part began. And it did not help that the one American on the trip kept trying out her humour (no one laughed) by saying “If we fall over the cliff here, we will be killed…and a few minutes later “If we fall over the cliff now we will only be injured”…and on and on she went for a good portion of the trip.

The dirt road had now transformed into a thick bed of mud, due to the pelting rain. The only “lane” on the highway was a narrow 1 ½ lane—suitable for 1 ½ buses or trucks to pass by each other with only inches to spare. And the cliffside barriers consisting sometimes of cement blocks and sometimes of boulders or stones, whose purpose was supposedly to prevent vehicles from falling off the cliff and plunging into the river far below, did not look terribly trustworthy.

At one point we had to back up when a road plow came through with the blade taking up the full width of the highway. The rest of the morning was filled with steep switch-backs, hair-pin turns, thick muddy, steep uphill climbs, and even some disturbing scenes of trucks and busses that took a turn a bit too quickly or perhaps got muscled off the highway by a larger vehicle.

By 12:30 pm when we stopped at immigration to exit Tibet, despite the cold drizzle and the long line up to show our passports, we were very happy to be standing on terra firma. But the first half of the journey was not quite over yet.

It was another 9 km to the Friendship Bridge that marked the border between China and Nepal. Our bus turned the corner only to be met by a raging current/waterfall spilling off the mountain and onto the road. After delicately passing through that, (we were sure the water would sweep us off the road), we travelled up another steep muddy incline and then through a rock gap that we felt, we only cleared by holding our breath, thus making the bus thinner!

And finally we reached the Bridge where we transferred our luggage, filled out immigration forms for re-entry into Nepal, and then boarded our Nepali bus for the final push to Kathmandu. We all remarked that the driver looked about 15 years old but our fears were dispelled as he skillfully negotiated more of the same road conditions we had experienced on the Tibetan side.

Eventually the road became wider, then we encountered pavement and then we joined the regular cacophony of the ‘going home’ traffic: blaring horns, 5 cars abreast a 2 lane road, people and animals on and beside the road and more thick fog, but we were almost home. At 5:45, accounting for the time change, we were back at our hotel in Kathmandu, a mere 14 hours and 15 minutes after leaving Tingri.

While so-called reality television shows are in many cases ‘scripted reality’ the next time you watch the Ice Road Truckers, I hope you appreciate that the ‘plot’ may be scripted but the driving conditions are the real thing. I speak from experience.