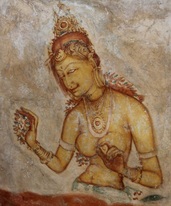 Celestial Nymph at Sigiriya, Sri Lanka
Mr. Inverso, my Grade 11 history teacher is to blame.   He had us read portions of The Golden Bough, Sir James George Frazer’s classic book on religion, spirituality, totemic beliefs and creation myths, and then present an example of a local custom to the class.  While this was many years ago, I remember talking about one of the Australian Aboriginal creation myths, and while to us at the time, the practices of people that we only knew through reading books sounded strange and story-bookish, the reality of this first flirtation with anthropology was quite profound.  Years later I would read The Songlines by Bruce Chatwin and further understand the power of tradition and culture and the lineage of totemic beliefs.

When I visited Borneo in the late 1980’s I was mesmerized upon discovering that totems, spirits living in trees or waters or birds or the sky or in carvings, played a very important role in the way that the local Iban people conducted their daily lives.   On one occasion, prior to setting up camp for the night in the jungle outside of Kuching, we waited while our guides lit a candle and placed it in a tree along with some simple decorations, in order to thank the spirit of the water that we had to cross to get to our campsite, and the spirit of the trees that would stand guard over us during the evening.

And when I made my first visit to Thailand, one year later and we spent considerable time trekking in the villages around Chiang Mai, we learned about the significance of the ubiquitous spirit houses as vehicles to thank the spirits of the land for protecting the houses and inhabitants of the village.  Later, when we explored Bangkok we found spirit houses outside of almost all the homes, restaurants and buildings.  Before you enter and when you leave, you bring your hands together, at about nose level or even higher in a “wye” gesture to pay homage to the spirits.

Travel and education have always gone hand in hand and those who are open minded and curious have always relished in the prospect of learning how other people live and think and believe and worship.  Outside of one’s own beliefs, travellers have so many opportunities to discover, first hand, about the mosques in Turkey or the synagogues in Israel or Eastern Europe, or the Churches in Rome, or the Hindu Temples in Sri Lanka or the Sikh temples in India.  There are those who are fascinated by Buddhism and want to understand the rites of worship in Thailand or Cambodia or Mongolia.  And there are those who visited the Shinto temples in Japan or clapped their hands twice and rang the bell in local Shinto shrines to make the Kami, or spirits, aware of their presence and to bestow good fortune, with the hope that even as travellers who may not overtly share the same beliefs, they are trying to understand and identify with the people in the country in which they are visitors.

After seeing a photo in a  Lonely Planet Guide, of a terribly scary black demon-like figure in a temple in Tainan, Taiwan, I actually, truth be told, travelled on my next trip from Taipei down to the southern end of the Island, just to find that demon.  And once I did find it, I just looked at it to appreciate why it was there and how it helped to influence the mores of society in the Tainan area.  I remember having the same feeling when I was in Rome and I spent 30 minutes all alone with Michaelangelo’s statue of Moses in the Church St. Pietro in Vincolo, contemplating how one statue could influence so many people over the years.

One of my chief mentors in explaining such art treasures as the black demon in Tainan or the statue of Moses  or for that matter, the elaborate decorations on Hindu temple or the frescoes in the caves of Capadoccia,  was a priest who served as our tour guide on a visit to the Basilica San Francesco in Assisi, Italy.  After showing us the amazing frescoes, he actually explained the significance of them, which from that point on, helped me to better understand statues, paintings cave drawings, and religious art, loosely defined,  anywhere in the world.  It all had to do with comic books!

The priest quizzed us and asked why comic books have such an appeal.  The answer was that even if you don’t speak the language; even if you are illiterate, you can still look at the drawings and relate to the story being told—especially if you are familiar with the story through word of mouth,  Therefore, if the priest in the church is speaking about hell and damnation, and you see a fresco with a graphic of the underworld, then someone who is not able to read the Bible (or even someone who is literate) can visually see what kind of horrors and tortures await those who don’t follow the tenets of religion which was, in almost all cases, the tenets of society.  And in societies where books simply did not exist and word-of-mouth lessons were

So the black demon in Tainan was no different than the frescoes in Assisi or cave paintings in the Lascaux caves of France or the celestial; nymphs at Sigiriya in Sri Lanka or on the temples at Angkor Wat.  They all depict the words of the leaders of society and translate them in memorable fashion to the people, to impress on them the stories and fables and myths about societal rules and ethical behaviour. Once, as a traveller, you are able to put picture-words into context, then exposure to the practices of any religion  (possibly including your own), become a fascinating journey of discovery.

For many inveterate travellers, every travel experience is a pilgrimage and every souvenir becomes a treasured relic of that journey.  We like to use words like pilgrimage to denote a specific religious experience but it does not necessarily have to be that way.  Religious beliefs have always been highly personal and each individual’s relationship with their diety has always been an intimate, meaningful and sacred bond.   As travellers who open-mindedly explore other religions and beliefs we can come closer to understanding that bond and thereby make the travel experience itself an exercise in appreciating cultures and diversity.  By bringing that understanding back home with us, we can better contribute to closer ties with our own multicultural, vibrant community.

Therefore, don’t shy away at the very mention of religious travel or pilgrimage travel, as whether you realize it or not, it affects you and it affects your clients.   Some may see it as a reason to travel; some will see it as a niche interest; some may see it was a duty while they are in another country; and others who don’t share in the predominant religion of the chosen country will see it as an opportunity to learn and add to their personal goal of taking ‘the higher ground’ when they travel and helping to make our world a more livable place.