Down in Mexico
Feeling Free as the Air 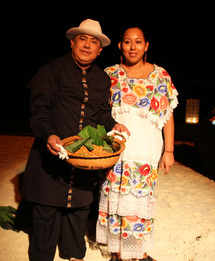 I’m a sucker for a good mariachi band.  But on a recent trip to the Yucatan, sponsored by the Mexican Tourist Board and Sunwing, I have to admit that I drifted.  While the band was serenading us with such classics as ‘Cielito Lindo’ and ‘Que sas, que sas, que sas’, my thoughts were infected with one of those ear worms, you know, a tune that you just can’t get out of your mind. In this case it was the 1969 Edward Bear song, ‘You, Me and Mexico’ and the lyrics kept repeating...

Cause I'm thinking of you down in Mexico,
Feeling free as the air,
Here I am stuck in the city,
Still going nowhere

People that know my travel habits were actually surprised to hear that I was venturing back to Mexico - my first trip since the mid-1980’s  when on three different occasions, I visited Zihuatanejo, then Akumal and the emerging Mayan Riviera, and then Acapulco.  Now I was returning for the first time in 25 years and boy, was I impressed.

Of course, nothing looked familiar with all the development that Cancun has experienced over the years.  The drive from the airport to our hotel passed one giant resort after another along with a host of modern shopping malls featuring upscale vendors, such as Louis Vuitton, as well as the mythical Coco Bongo and Senor Frogs, popular night clubs, in which those in the know, at least in our group, had had their own mythical evenings.

RIU’s Palace Peninsula is the newest hotel in town, about a 20 minute drive from downtown Cancun. This is techno-Cancun where aside from a carefully preserved pre-Hispanic structure on a site known as Ta’akul near the swimming pool, the lobby is ultra-modern Manhattan glitz with silver and mauve columns.  The rooms, all with balconies, face the ocean, are large and comfortable and include a Jacuzzi tub.  But this was a Fam trip so we had just enough time to check out the room amenities, discover the hotel restaurants, grab a quick snack at this all-inclusive property, and then meet the bus for the three-hour drive to Chichen Itza.

After a lunch stop in the town of Piste, just outside of Chichen Itza, we entered the archeological site of what was once one of the largest Mayan cities in the Americas.

The name itself means “the mouth of the well of the Itza” and refers to two large cenotes (collapsed limestone caves that allow the natural spring water to rise to the surface) and the Itza, or the people, who were the ‘enchanters of the water’.

We were visiting specifically to witness the autumnal equinox where at roughly 4:00 pm, the sun’s rays would shine on the four-sided pyramidal structure of the Temple of Kukulkan, light up a series of triangular shapes and strike the sculpted head of the Kukulkan or feathered serpent, at the base.  But heavy clouds covered the sun, so after exploring some of the other sites in the complex, we left after a few hours, along with the 5000 other ‘seekers of mystery’ who had waited for the defining event to occur.

We arrived back in Cancun after dark, had a delicious dinner at the buffet restaurant and called it a night.

Day Two started off with rain, but quickly changed to steamy sunshine.  After breakfast we drove the short distance to Albatros Catamaran, boarded our private charter, the Tom Cat, and headed out for a relaxed day of ‘why people love Cancun’.

Wearing our “open bar’ wrist bands certainly helped get into the spirit of things, but then again so did the calm waters of the Caribbean Sea.  After an hour or so, it was time to visit the underwater sculptural museum.

Of course, not being a water aficionado, I was the one who asked if we had to go underwater to appreciate the sculptures. Fast forward 15 minutes to me, in my flippers and snorkeling gear, jumping into the water and being totally amazed at the array of colourful fish.  And then our guide led us over to the sculptures garden, conceived by English artist Jason Decaires Taylor. The nearly 400 figures were molded from real people and are intended to provide a habitat and protection to the aquatic life, as well as a visual treasure to snorkelers and scuba divers.

Following our water adventure, we set out for Isla Mujeres, first for a buffet lunch and a taste of Charro Negro—which is a concoction of Tequila and Coca Cola (interesting taste, more interesting after-effect) before visiting Hidalgo, the main street of the island where most of the shops and bars are located.

It was a fun visit with lively vendors engaging the few tourists who were wandering the town that afternoon.  Starved for a caffeine fix, I honed in on the Café Mogagua, a funky 1960’s Bali-esque restaurant on a side street that parades peace signs, Buddha statues, and slogans from Gandhi (“Happiness is when what you think, what you say and what you do are in harmony”) as well as their own T-shirts that admonish visitors to “face your fears and live your dreams”.

Back on the catamaran we outran a rain storm to arrive at our hotel for some relaxation before heading out once again for an amazing hosted evening at the Fiesta Americana Resort, just down the road. The manager greeted us with a 12 piece Mariachi orchestra, treated us to tequila tasting under a screen on which old Mexican movies were projected, and then took us to the beach where we ogled at a traditional shamanistic fire ritual, before indulging in some very creative Mayan-fusion dishes.

In fact the emphasis on the evening was on education and preservation of the Mayan culture, but with a business focus on paying heed to the changing travel demographics that define Cancun’s many visitors.

On the third day, we said our goodbyes to Cancun and headed down south to the Mayan Riviera and on to XCaret eco-park.

The name Xcaret (esh karet) means ‘small inlet’ in Mayan and pays tribute to the archeological settlement nearby.  The park itself is huge and features such attractions as a cenote in which visitors can swim and snorkel, animal pens that feature tapirs, jaguars, macaws, flamingos and spider monkeys, a re-creation of a traditional cemetery with colourful and sometimes humorous folk-art tombstones, a Mayan ball court and a beach area for relaxing and sampling the BIG bottles of Corona beer. (They sell for about $22.00 Canadian each.)  Xcaret is a family oriented ‘amusement’ park but I give it full credit for  emphasizing education, adventure and discovery and playing down the commercial aspects.  In short, it was a lot of fun.

In the afternoon we checked into the Grand Yucatan Princess Hotel following a lively greeting by four costumed dancers.  This is a huge resort, where you take golf cart taxis to get from your room block to the beach—or walk the 10 minutes-- which is what we did.  The rooms are large, with Jacuzzi tubs and, in our adults-only wing, we could open the door to the patio and then jump into the pool connecting all the rooms.

In the evening we drove into Playa del Carmen and explored the colour, lights, music and non-stop energy of 5th Avenue, a long stretch of restaurants, bars and shops. Dinner was at La Casa del Agua, where the food and the ambiance are wonderful.  Try the seared tuna!  Playa del Carmen is one place that is definitely on my ‘must return’ list.

Before heading to Cancun airport on the last day, we drove to a nearby park to experience three cenotes.  The water in each was crystal clear. Three scuba divers were just surfacing in one cenote.  At another, a number of   small stalactites graced the collapsed cave roof, along with a number of  tree roots that had forced their way through the limestone to access the water below.  Ahhh, nature always finds a way.  When we reached the last cenote in a peaceful pond setting, we jumped into the cool refreshing water.

What an adventure!  Of course many who are Mexico-bound probably make the nearest sandy beach the sum of their daily activity, and there is certainly nothing wrong with that.  What I did not realize though was the number of opportunities for exploration and adventure; the obvious pride in celebrating the culture and history of the land, and how personable, dedicated and enthusiastic our hosts were in both Cancun and the Riviera Maya.

But you know, that Edward Bear song is still in my mind…down in Mexico…feeling free as the air.  What an exhilarating way to think about returning to this amazing destination.