Taking your Life in your Hands:  Practicing to be a Dissuasion Specialist 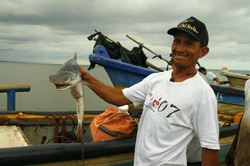 Wonderful, warm people in El Salvador
I did not get mugged.  I did not get sick from the food or the water.  I did not contract malaria. I did not shut myself into my hotel room for 24 hours a day.  I had a great time, met some great people, took 2,468 photos, and I can’t wait to return. So, what was all the hubbub about travelling to El Salvador for my summer holiday?  Everyone I spoke to, from my travel physician to heads of other tourist boards, to travel educators and, yes, to professional travel counsellors, all had an opinion about El Salvador, yet few had actually visited the country.
“Be careful”  “Don’t get mugged”  “Don’t wear jewellery”  “Don’t bring your camera”  “When they pull a gun on you and demand your money, just give it to them”.  And so my resolve to have a successful vacation hardened, although fear kept creeping into the equation.


Be Afraid, Be Very Afraid

That famous promotional line from the movie “The Fly” kept lurking in my mind.

What if they are right?  Am I in fact taking my life in my hands by going to El Salvador?  And it was probably a good thing that I didn’t mention that I would also be visiting Guatemala for a few days and then flying into Tegucigalpa, Honduras for three nights.

I bought two money belts for security (and only used one); I brought along a fake wallet to offer to potential day-time street muggers( and never had occasion to use it), contemplated buying a 2nd camera instead of my fancy digital SLR (I decided not to), brought along the names of every personal contact I have at Foreign Affairs and RBC Insurance (and never contacted them), and two days before departure, seriously considered changing my plans altogether and going somewhere ‘safe(er)’.

The flight from Toronto to Miami was without incident, except that the Miami airport code, which happens to be MIA (the acronym for ‘Missing in Action’) seemed to be yet another ominous warning of things to come.

The 2 ½ hour flight to San Salvador was without incident and, as promised, the Sheraton El Presidente had a van ready and waiting to take us to the hotel in the Zona Rosa in which San Salvador's restaurants, shops and other hotels are located.

The first question to the hotel’s sales manager was whether it was ‘safe’ to go outside the hotel.  She responded “yes” and showed us a walking route. We asked about taking a taxi at night to a recommended restaurant outside the Zone.  Again, no problem. The cost would be $5.00 and when we were finished we could have someone call a taxi to take us back.  Seemed simple enough.

We went for our walk around the block, without incident and with smiles and greetings of “Buenas”, from the friendly neighbourhood police, security guards and shop keepers. In the evening we took a taxi to La Gran Via, one of the four shopping malls within a 10-minute drive of the hotel, and chose to eat at Senor Tenedor.

We were rewarded with excellent service and great food (the seafood pizza was amazing, as was the octopus carpaccio).  The indoor/outdoor mall itself is fairly upscale with designer clothes and prices that match those you would find in Canada.  And afterward we had the mall police call us a taxi and we returned home, safe and sound.  Day One and so far, so good.

The following six days were equally enjoyable.  Our four-hour city tour the next morning turned into a seven-hour excursion (with our enthusiastic approval) that included not only the volcanoes and lookouts that surround the valley in which San Salvador rests, but also the city centre and the historic buildings around Plaza Barrios.  We visited handicraft markets, waved at and took photos of gun-toting policemen (who waved back with big smiles on their faces) and had a lunch of the traditional El Salvador dish, “Papusas”: grilled flat thick corn tortillas stuffed with cheese, beans and meat, served with a side of fermented cabbage, as well as the ubiquitous “chile picante” (hot sauce).

In the days ahead we had dinner at Alo Nuestro, a very reasonably-priced fusion restaurant with the kind of food that causes you to savour every single bite and reflect on the amazing tastes in your mouth.

We shared the tilapia ceviche and I had the breaded sea bass while my friend had the pork tenderloin.  It is so rare to find restaurants, even in Toronto where I live, that inspire the palate as much as this one in San Salvador did.  On another evening we tried the Inka Grill, specializing in Peruvian dishes.  The food here was ‘ok’ but nothing to write home about.  So we repeated some of our earlier success stories for the remaining meals.  The rule of thumb in El Salvador is to find restaurants that are good (Bueno), Clean and with ambiance (Bonita), inexpensive (Barato) and with big portions (Bastante).

A land of Hidden Surprises

Working with the Ministry of Tourism, our activities during our stay in El Salvador kept us very busy (at our request) and continually amazed us with opportunities for adventure (and photography).

About one hour outside of San Salvador lies the small colonial town of Suchitoto.  Our guide kept apologizing for the lack of something specific to do in the town, but we kept repeating that ‘being there’ was rewarding enough.

Wandering the streets, inspecting some of the hotels and resorts with breathtaking views of the nearby lake and mountains, visiting the art galleries, attending a one-on-one workshop with 91 year old Victoria de Jesus a Costa who has been rolling cigars for the past 65 years, enjoying lunch at El Tejado, a hotel that overlooks a lush valley.  and then taking a trip on the Lupita, a small boat on Suchitoto Lake, to see the bird sanctuary, filled with cormorants, egrets, herons and the so-called “pig-ducks” (for the grunting noises they make).  A cold drink on the porch of  the Hotel Las Puertas in the town square ended a perfect, sunny, hot day.

On Saturday we opted to climb Santa Ana Volcano to see the green lagoon in the crater at the top.  The climb is, shall we say, for those with very good stamina and takes about an hour from the base of the volcano (which is already at 1600 m above sea level), to the crater on top.  Let’s just say it took me a tad longer to climb in the 30+ Celsius temperature at noon time, but the views of the lagoon and nearby Lake Coatepeque made it all worthwhile.

After the one hour descent, we visited the town of Santa Ana to check out the historic town centre including the gothic-inspired ‘Teatro’, commissioned by the coffee barons at the turn of the century.

Sunday was our day to visit the canopy and the Ruta de la Flores.  The canopy at Apaneca consists of 13 zip-lines of various lengths (and speeds) and after the truck takes you to the first platform, you spend the next hour hooking yourself into the wheel apparatus, grabbing onto the cable with a thick glove (this is your hand brake) and jumping off the tree platforms as you Zzzzzzip to the next tree—through the coffee plantation, over picturesque valleys, and with the volcanoes gracing the horizon.  It is a thrilling experience.  The youngest in the group was 7, the oldest was probably in his early 60’s, and for the record, the staff are very safety conscious.

Afterward we travelled along the Ruta de la Flores which is the roadway that connects a number of small villages, each of whom have a Sunday market featuring local foods, handicrafts, music, colour, and photo opportunities galore.  We visited the towns of Ataco, Juayua, Salcoatitan, Nahuicalco and Izalco, before heading back to San Salvador (about 90 minutes away).

On Monday we headed out to Barra de Santiago, which is a wetland area on the Pacific coast that features a great beach, and warm, friendly people.  We visited a protected turtle nesting ground, took a boat trip through the mangrove swamp, hiked across a pineapple plantation to see the ancient site where the pre-Mayan Cotzumalhuapa people lived and traded their corn and salt for jade to be used in religious ceremonies, and visited an eco-lodge.  On the way back to San Salvador we stopped at the tourism complex at La Libertad  to visit the very busy fisherman’s wharf, and the numerous stalls selling freshly caught fish and seafood.  Again, a great day.

We had already visited the Art Museum next to the Sheraton Hotel in El Salvador and on Tuesday we toured the other major attraction, the National Museum of Anthropology, just down the street.  We asked for an abbreviated one hour tour but then extended it, based on the number of fascinating exhibits, including the perrito con ruedes—the little dog with wheels—which disproved the theory that Europeans introduced the wheel to Central America(in fact the wheel had been discovered here centuries before).

Our very last stop was at El Arbor de Dios, the Tree of Life Studio of Fernando Llort, the famous artist who designed the façade of the San Salvador Cathedral as well as the murals throughout the town of La Palma in the north.  The artist’s son provided a talk about his dad and explained some of the symbolism in the art on display.

Finally, at 1:00 pm on Day 7 of our stay in San Salvador, rested!  It was also time to reflect on the number of great activities, the wonderful people, the delicious food experiences and the opportunities that our visit to El Salvador had afforded us.  Who would have thought?  And we still had not seen other attractions such as El Impossible National Park or the Mayan ruins at Tazumal.

But this is also a lesson for travel professionals.  Your job should be mounted on a frame of knowledgeable infectious enthusiasm for ‘travel” and not on collecting thank-yous from your clients for having dissuaded them from visiting destinations that you think are dangerous or unappealing.

Knowledge comes from research based on guide books and the internet and by speaking with people who have actually had experience in the country.  Of course there are countries where some precautions need to be taken and it makes no sense to walk the streets carrying large wads of cash or flashy jewellery.

San Salvador has its good areas and bad areas (just like Toronto and Vancouver).  The civil war has been over since 1992 and, as the El Salvadorean expression goes “La tortilla dio vuelta” (roughly, “the tortilla has turned”) and many of the guerillas who fought against the government now have respectable positions in government, in the community and in tourism.

There is no honour in being a ‘travel-dissuasion specialist”.  A modicum of constructive caution is appropriate if a client wishes to travel to what you might consider to be a questionable destination, but do your homework and filter out the hearsay from the reality.  Who knows?  Your clients may get hooked on discovering new countries and refer your expertise to their friends, as the one who went out of your way to make it possible for them to discover a new destination. You may learn something too.

And…what exactly do you mean that there is no value whatsoever in visiting the city of Tegucigalpa in Honduras?  Stay tuned…