Rising Above it All in Cappadocia 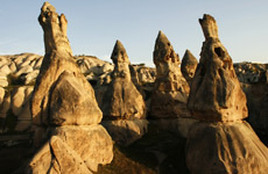 It was Sunday morning and we were in the town of Urgup, in Cappadocia Turkey. After a 10 hour direct flight from Toronto, we made a brief touch down in Istanbul on the Friday night, enough time to throw our bags in our room, check out the pedestrian mall by Taksim Square, enjoy a great meal at Haci-Baba Restaurant, have the hotel fix our air conditioning at 2:00 am, and even manage a few hours of sleep. By 5:15 am, we were in a taxi headed back to the airport for the 70 minute flight to Keyseri airport, about 45 minutes from the Cappadocia area.

Saturday was spent touring some less touristy areas on the outskirts of Cappadocia including the Sogonli Valley cave churches and pigeon houses, as well as the town of Mustafapasa.

After a night in the Esbelli Evi Cave Hotel (one of the best in the area), we stood outside at 5:00 am on Sunday morning waiting for the bus to take us to the Kapadokya Hot Air Balloon check-in station. The trip was made possible by Murat Ozguk, the enthusiastic and personable owner of TravelAtelier, a local tour company After registration and coffee, another bus took our group of 12 passengers out to our balloon, where we watched as it was inflated, and then quickly readied for take-off with 3 passengers in each of the 4 partitions in the basket. Serhan Leki, our pilot, provided safety instructions in case of a rough landing and then, as the song goes, it was ‘ up, up and away” and the spectacle of the unique Cappadocia landscape unfolded before our eyes. Serhan took us to within arms reach of some land structures, as he dropped into canyons and then, seemingly at the last minute, lifted the balloon to avoid a collision with the canyon walls.

Capppadocia is perfectly suited to hot air balloon rides because of the variety of land forms—from the famous fairy chimneys, to mushroom topped pinnacles, to the imposing land fortress known as Uchishar. We skipped in-between houses and shocked some hotel residents on a terrace who glanced up from their morning coffee to see us floating by from only a few feet away. We waved to kids playing in the courtyards of their homes and watched from great heights as the 45 other balloons in the sky, played follow-the-leader in the wind currents.

The 90 minute ride goes by quickly and we were all friends by the end of the trip. Despite the safety warnings, Serhan expertly landed the basket right on the small narrow trailer that would transport it back to town. The bus driver met us (cell phones and GPS pinpointed the exact place where we would land) and after the balloon was deflated, we are treated to the local Cappadocia ‘mimosa’ of Champagne and cherry juice.

When we arrived back at our hotel for breakfast around 9:00 am, I noticed that somehow I had taken over 100 photos during the flight. A hot air balloon ride in Cappadocia was the perfect way to start our land tour of the amazing attractions, unique to the area.