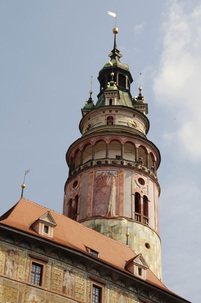 Word of Warning:  Don’t get your Krumlovs mixed up. Just as the proverbial travellers who wanted to visit Sydney, Australia and somehow booked themselves on a flight to Sydney, Nova Scotia, the Krumlovs in the Czech Republic are very different.  Moravsky Krumlov is a small town in the South Moravian Region, about a two and a half hour drive east of Prague, and mostly famous for a castle that houses the Art Nouveau paintings of Czech artist Alphonse Mucha.  Cesky Krumlov is a small town in the South Bohemian Region (hence the name Cesky, referring to Bohemia), about a three hour drive south of Prague, and is an amazing place to visit for its UNESCO World Heritage protected old town, castle and medieval atmosphere.

But first, a short note on day trippers. The popularity of the term was given a boost by the 1965 Beatles song Day Tripper, that was supposedly John Lennon’s play-on-words for weekend-only hippies.  In other words, it referred to someone who only dropped in for the experience and then dropped out again to resume their weekday corporate existence.

Today the term refers to travellers who make one day quickie tours or visits to a destination and then move on.  And there is nothing wrong with this, taking into consideration the need for tour companies to pack into the itinerary as much as possible, based on the need for travellers to see and do as much as they can on a package tour. However, like an iceberg that you see floating in the sea, what you uncover during a ‘day trip’ is usually only a small part of the destination. It’s what you see floating on the surface, and if you really want to appreciate the venue, you need to prolong your stay and see the place after the hordes of tourists depart—predictably around 4:00 pm, so they can arrive back home for dinner.

Cesky Krumlov works well for the day tripping crowd, but an overnight stay provides a destination immersion experience that few travellers have the chance to appreciate.  The scent of the night air, the reflections on the river, the resonance of footsteps on the cobblestone streets, the silhouettes of the ancient houses crowded together between the river bends, the sounds of relaxation and enjoyment emanating from the restaurants and bars, and that precious hush of ‘nothing’  that so many travellers yearn for on their holidays.

After several days exploring Prague, we took a Student Agency Bus to Cesky Krumlov.  The easily identified yellow, ultra-modern coaches are for all travellers (but they do provide discounts to students and seniors).  We arranged to stay at the Pension Kapr, on the west side of the Vltava River, really on a hunch that it would be clean, friendly, close to the old city and have a great view from our room.  The 500 year history of the Pension was also somewhat intriguing.

We were correct on all accounts and were more than pleased with the accommodating nature of the owners, the Benes family, who live on the top floor.

The view from our room was serene.  In front of us was the curve of the River, with a group of kayakers meandering toward the castle.  To our right, about a 6 minute walk, was one of the bridges that lead to the town centre.  The skyline showcased the old city houses, the Castle Tower, and the white bell tower of St. Vitus Church, and with such a captivating view, we had to start exploring right away.

Cesky Krumlov’s most prominent feature is the castle, sitting on a rocky promontory above the town, as well as the decorative, imposing castle tower. To get there we walked through “the Little Square”, also known as “Na Louzi” or “the puddle”, as water from a higher located square would collect here after rain falls.  The square includes a collection of Gothic style homes, museums and shops and lead us to Siroka Street, or ‘broad street’ (due to its width), which was where the town markets were held.

And then with cameras readied, we reached the castle, first mentioned in a Chronicle in the year  1253.  As you walk through one of the old city gates, you pass by the bear moat with its warning, not to feed to bears, and sure enough, emerging from a late morning snooze…was a bear!  The tradition dates back to the Lords of Rosenberg who once owned the castle, and their relationship with the Italian family, Orsini.  ‘Orsa’ means ‘bear’ and the Rosenbergs had bear motifs in the castle as well as on their coat of arms.  From the 16th century on, live bears were kept in the castle and today they are celebrated with festivals at Christmas time and on the bears’ birthdays!

A walk through the castle reveals Renaissance wall paintings, statues, an art gallery, beautifully kept gardens and elegantly decorated rooms that ooze splendour, riches and pomp.  Let’s face it.  This was the bling of the 17th, 18th and 19th centuries.

The most unforgettable feature of Cesky Krumlov is the Castle Tower, from which you can appreciate the small town, cluttered under the protection of the Castle, as well as the pastoral scenery trailing off in the distance.  The Tower has been around since the 13th century with renovations over the years, and when we were there, a team of artists were belaying with ropes off the observation level to care for the elaborate wall paintings hidden under an equally elaborately–painted protective tarpaulin.

With well over 100 digital photos taken, we had lunch at a riverside café (sausages, with mustard and horseradish, black bread and ice cold Eggenberg beer) and then set out to see a few more sites including the Marionette Museum, the art gallery and the Egon Schiele Art Center.  Ironically, Scheile who was from Vienna, had visited Cesky Krumlov, his mother’s native town,  but due to his routine of painting young girls in the nude, he was essentially driven out of town and later did not speak kindly of the place.  Still his paintings, drawings and life are celebrated in the Art Center.

As the day was ending, it was time to just wander through the town to see the Castle Tower from different light perspectives.  A brief but violent thunderstorm turned the sky black and we found a great coffee shop to pass the time before heading back to the Pension.   After freshening up we chose the restaurant “U Dwau Maryi” for dinner, based on the recommendation that we could try medieval dishes of buckwheat and millet.  In fact the food was delicious, the view from our table by the river was calming and serene, and it was a perfect way to end the day.

A rhapsody is a type of music that, according to Wikipedia has “an air of spontaneous inspiration and a sense of  improvisation”, and what a perfect way to describe the niche market of ‘vagabond travel”.  The mentality of the vagabond is to explore, walk down streets that don’t appear on maps, walk into shops and chat with the owners to get a ‘sense of place’, try the local foods, and appreciate the historicity of a destination that takes in the movement of people, the traditions, culture and life-style celebrations.

While not a sole claimant to this honour, Cesky Krumlov is a vagabond traveller’s dream come true:  a rhapsodic travel experience—in Bohemia!